Hello, and thank you very much for visiting our site. There is a wealth of information on line regarding Project Servator, but if you are wanting more specific information regarding the West Yorkshire region then hopefully you will find it here.

The West Yorkshire Project Servator team have been gainfully employed over the last couple of months across the whole county. We have had some very busy days and have assisted every single division across the force area.

There appears to be a little bit more normality returning, although at this point the law has not changed around COVID-19, and so our team are working hard behind the scenes to get prepared for people returning to the city centres and (fingers crossed) just maybe our packed and exciting events calendar across the County can start to flex it's muscles again.

The Mounted section deploy regularly with Project Servator. The riders are all trained in our tactics and have a unique vantage point above the crowds. 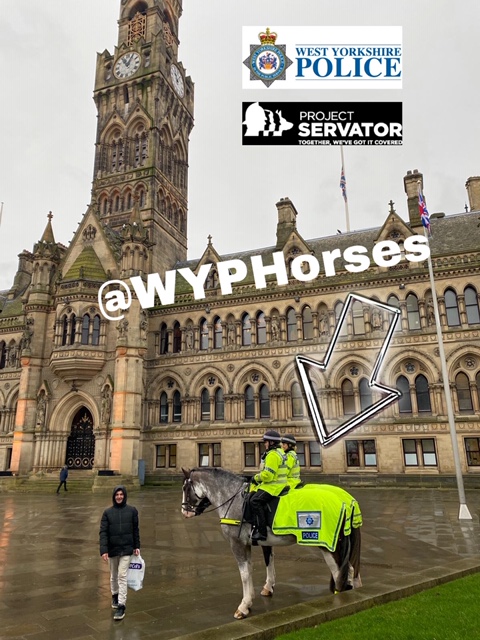 The Duke and Duchess of Cambridge enjoyed a whistle stop tour of Bradford and got to meet some great young local people with big plans for their futures. Sadly the Servator team didn't get close enough to say hello, but we did enjoy rubbing shoulders with the crowds.

The Duchess of Cambridge enjoying meeting the people of Bradford.

Thursday 9th January: The Project Servator team enjoyed working around Leeds city centre over December. It's always busy and we get some absolutely fantastic interaction from the public. We recorded some great comments: "Lovely to see police officers out and about." "Nice to see officers on the street." "You're doing a great job." "All the stores in Leeds like what Servator brings to Leeds."

We enjoy doing what we do to keep the workers, inhabitants and visitors to West Yorkshire safe and sound. And we wouldn't have it any other way.

Wednesday 13th November: It was a rather busy opening to the Christmas period for the Servator team. We had the Christmas Light switch on, Remembrance Sunday and the opening of the Christmas Market. During the deployments we had a number of arrests including; 1 male for theft of pedal cycle. He also happened to have an amount of Spice on him so he was further arrested for Possession with intent to Supply. Another male was wanted on warrant. And finally a young Albanian gentleman was residing in the country on an Italian passport and so was arrested on immigration offences. We also managed to seize a couple of vehicles and issue some requests for vehicle documentation.

Tuesday 15th October: A marvellous Leeds Light Night event was held on the 10th and 11th of October. Our team was deployed prior to, and during the event itself. Thousands of happy people came and enjoyed the installations with the only hitch being the rain on Thursday night. Over the course of our deployments 4 arrests were made; 2 for theft, 1 for immigration offences and 1 under the mental health act.

Wednesday 1st October: Our team was busy in the run up to, and during the UCI World Cycling event. We had successful deployments in both Bradford and Leeds and we would like to thank our colleagues at those divisions for the invaluable support they provided. 2 arrests were made, 1 in Leeds and 1 in Bradford and both were made by utilising the specialist training our Project Servator Officers have received, to be able to identify people with criminal intent. One male in Leeds had been supplying false details on a regular basis but due to the training and tenacity of our officers we were able to establish his real identity and discover that he had been wanted since 2015 on drugs offences !

The event itself went off without a hitch and that was due in no small part to our colleagues in North Yorkshire Police who based their whole 9 day security operation on Project Servator.

Tuesday 30th September: A warm (!) welcome to our partners in New South Wales Police who this weekend have launched Project Servator in Sydney. Congratulations cobbers and welcome to the team. Please be aware that job share is very much an option :-)

Wednesday 21st August: So Ed has been and gone. A massive undertaking by the council, Showsec and the Police to get everyone in and out safely. A big shame about the weather on Friday which certainly ruined a lot of carefully put together outfits ! On average the team walked 15 miles over the course of the two show nights - Much more if you add in our visits during the setting up phase, and the run up to the event. Project Servator don't just show up on the night. Our primary role is to disrupt the planning stage of an attack, so we're on hand prior to any events we attend.

Wednesday 7th August: Sadly we don't have time to reflect on what looked like an extremely successful Pride. Project Servator is now shifting its attention to the upcoming Ed Sheeran event at Roundhay Park and the UCI World Cycling Championship. Plus, of course our regular standard deployments and all the other events (dare we say it) in the run up to Christmas !

Thursday 11th July: Over the last 4 weeks Project Servator officers have been conducting training sessions with the CCTV operators at Safer Leeds to help them identify Hostile Reconnaissance and promote a better working relationship with Project Servator. 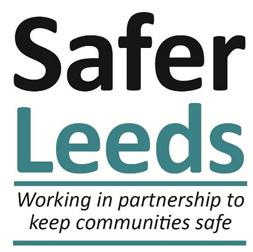 Our launch video has been selected by the Counter Terrorism Policing team to go on their website as an introduction to Project Servator. You can find it by following this link - https://www.counterterrorism.police.uk/servator/

Friday 7th June: Project Servator have signed up to West Yorkshire Community Alert. We can now send out emails to thousands of followers. Keeping the public and local business up to date with regular information. #TogetherWeveGotItCovered

Bus services in Leeds are getting on board with a cutting edge police project to disrupt criminal activity.

A number of First Leeds services are to begin to feature specially designed artwork for Project Servator from January as part of continuing work by authorities to encourage residents to report suspicious behaviour and make it more difficult for criminals to operate.

More information can be found here.

Project Servator aims to disrupt a range of criminal activity, including terrorism, while providing a reassuring presence for the public.

We are working with partners, including businesses and the public, to continue to protect West Yorkshire communities and everyone who lives or works here and make it a difficult place for criminals and terrorists to operate.

Our Project Servator deployments are highly visible and unpredictable and can happen at any time, anywhere. 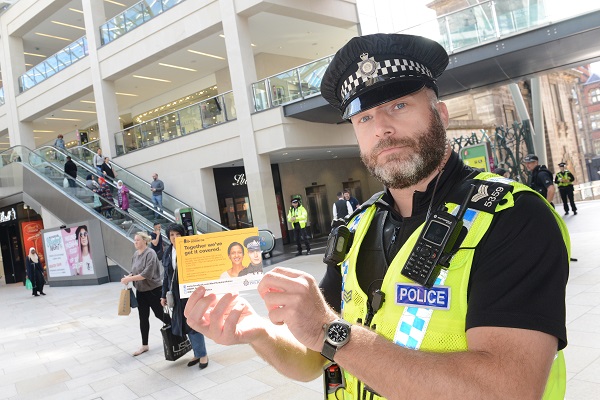 What we will do

If a Project Servator deployment is happening where you are, there’s nothing to worry about. They are normal police deployments.

Project Servator sees the deployment of both highly visible and covert officers, supported by other resources such as dogs, horses, firearms officers, vehicle checkpoints, Automatic Number Plate Recognition (ANPR) and CCTV. The deployments can happen anywhere and at any time and include officers who are specially-trained to spot the tell-tale signs of individuals who may have criminal intent.

Officers will talk to the public and local businesses to let them know what they are doing and remind them to be vigilant, trust their instincts and report any suspicious or unusual behaviour. You may also see officers handing out leaflets explaining what Project Servator is, or posters on display.

Working with the community is a vital part of making Project Servator a success. If you have any questions please feel free to talk to our officers.

Our teams also work with partners, such as British Transport Police, security staff and CCTV operators to carry out deployments. Together, we’ve got it covered. 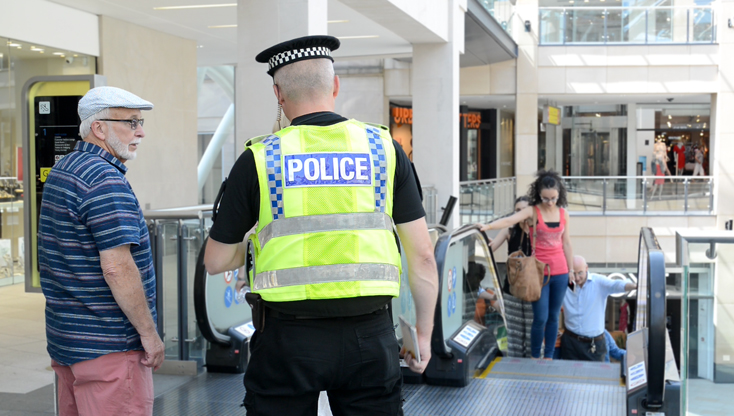 What we need you to do

You have an important role to play in helping to make Project Servator a success by reporting anything that doesn’t feel right, for example an unattended item or someone acting suspiciously.

You can report your concerns to officers who are out and about. Alternatively , contact us on 101. In an emergency, always use 999.

We also need you to remain vigilant while out and about, and to follow national ACT (Action Counters Terrorism) guidance. More information on what to look out for and how to contact police can be found at www.gov.uk/ACT. 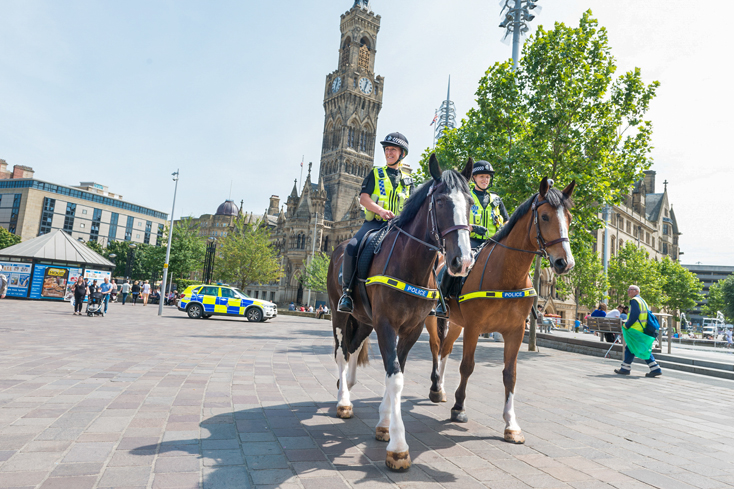 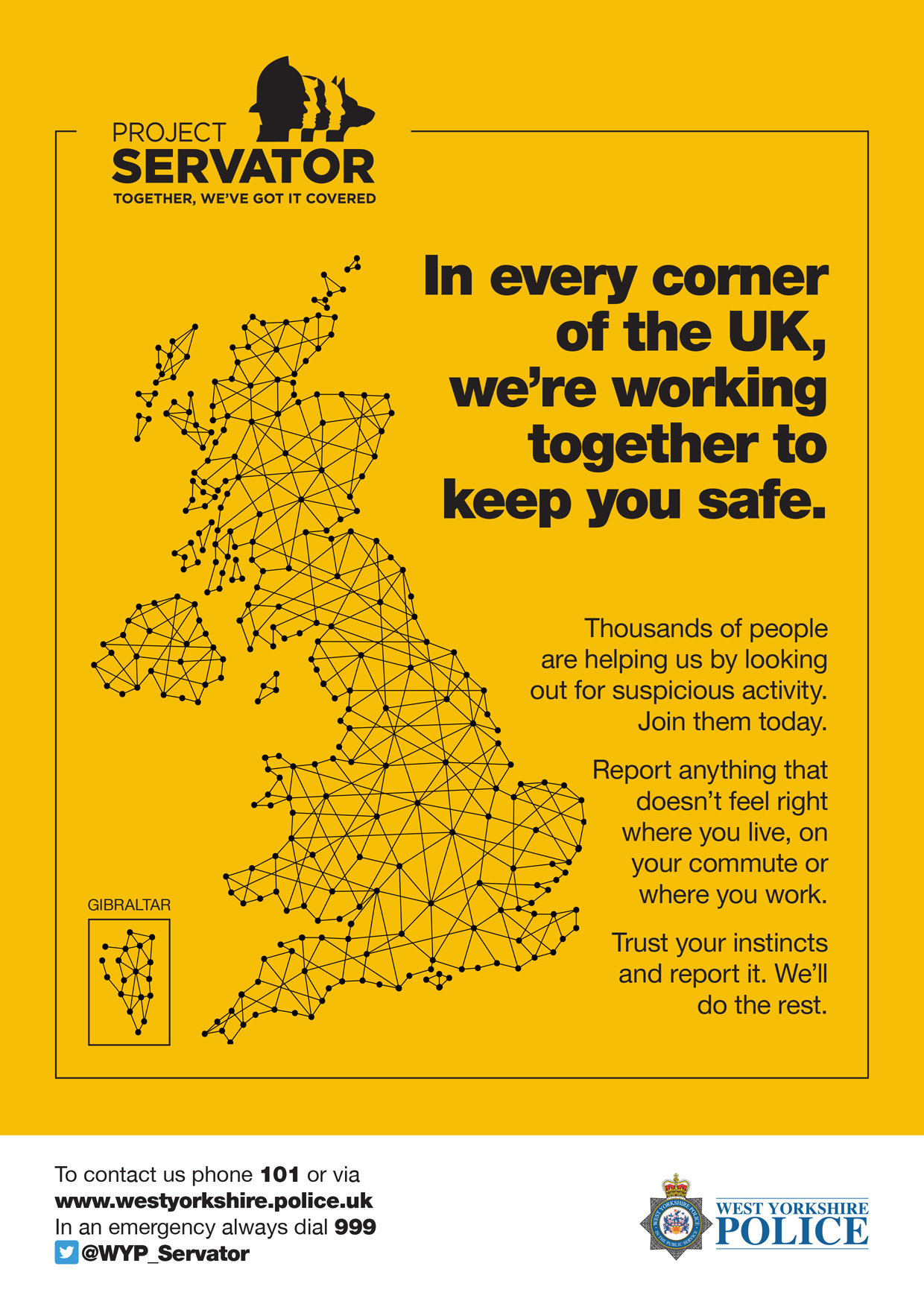 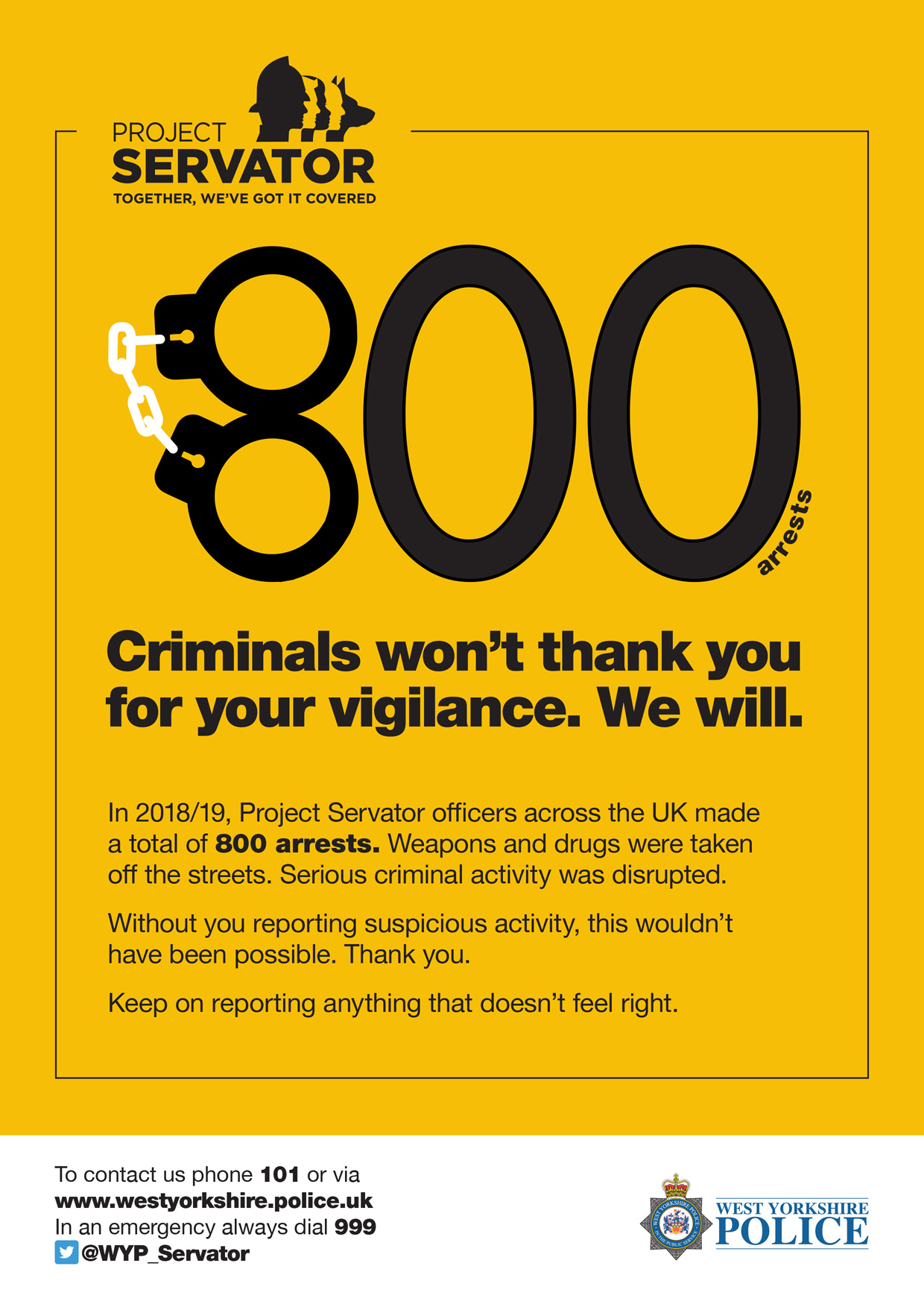 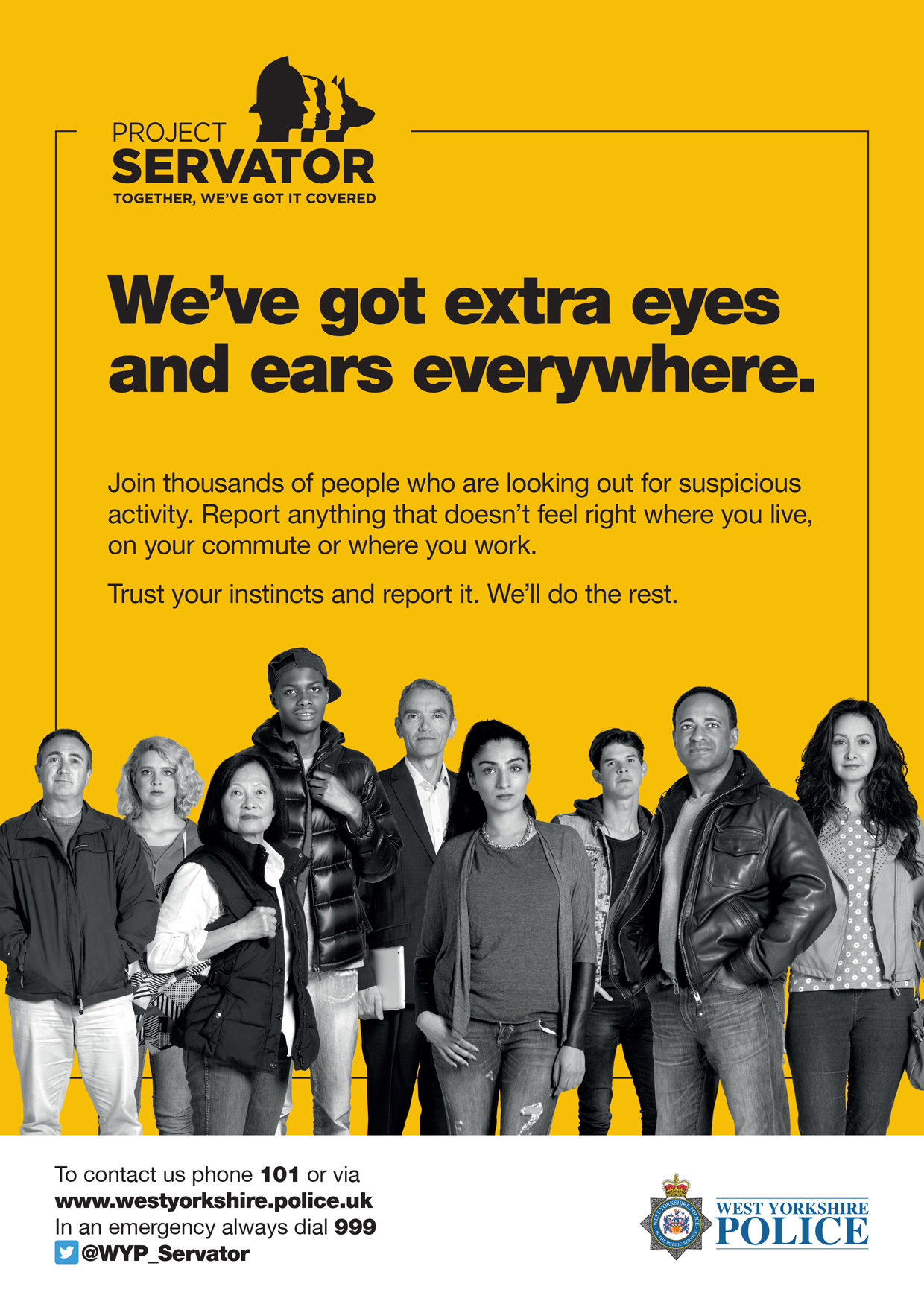 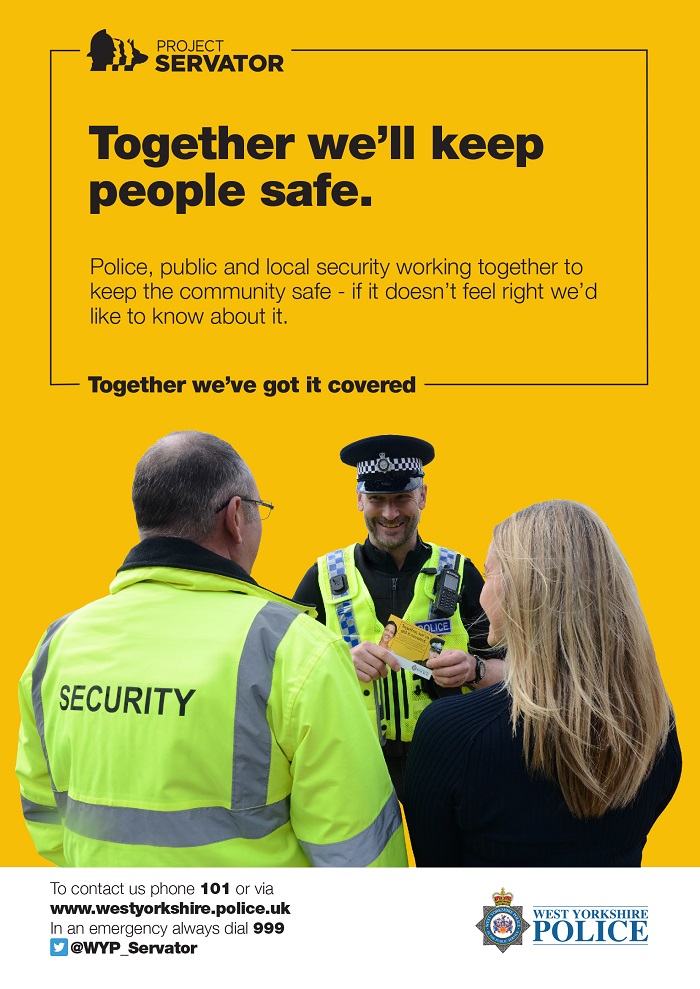 The clip was broadcast last night (Monday) on BBC Look North and includes an interview with ACC Russ Foster.

Project Servator aims to disrupt a range of criminal activity, including terrorism, while providing a reassuring presence for the public.

The Force is working with partners, including businesses and the public, to continue to protect West Yorkshire communities and everyone who lives or works here and make it a difficult place for criminals and terrorists to operate.