It is an abhorrent crime and West Yorkshire Police is committed to dismantling CSE networks, protecting victims and those at risk, and seeking justice for those who have suffered at the hands of abusers.

West Yorkshire Police has invested significantly in its safeguarding capabilities. Each of the Force’s five policing districts has its own dedicated inter-disciplinary child safeguarding team.  These teams manage investigations and also work closely with multi-agency partners in child protection, including the NHS, local authorities, charities and schools.

Oversight and support for the most complex multi suspect CSE investigations is provided by the Force’s specialist Protective Services Crime department.

In partnership with local authorities and other organisations, the Force has developed a great deal of experience in investigating CSE and has brought a number of successful and highly publicised prosecutions in recent years.

West Yorkshire Police is continuing to undertake a number of major investigations into child sexual exploitation related offending with a number of cases due to go to trial.
Safeguarding work undertaken by the force in recent years has included schools engagement projects, collaborative work with charities and campaigns including Who Are You Really Talking To? and Know The Signs (see below), aimed at helping children and parents spot grooming activity.

Protecting children and putting the victim at the heart of everything we do is our primary focus, it is important for victims to tell us what has happened to them to give us a chance to put abusers behind bars.

We want victims to be reassured that we do and will treat them with the utmost sensitivity, and that their needs and welfare are paramount.

What is child sexual exploitation?

Child Sexual Exploitation (CSE) is a type of child sexual abuse.  It is the organised and deliberate exploitation of a child purely for the sexual gratification of adults.

Any young person could become a victim of child sexual exploitation; the crime affects both girls and boys, from any background and of any ethnicity.

There are three main types of CSE –

How can we educate young people about the dangers?

A great deal of work has been ongoing to make young people aware of the dangers of Child Sexual Exploitation. This includes regular work from partner organisations within schools to make pupils aware of this offence and how to identify it. There have also been a number of educational events which specialist officers have attended. This preventative work compliments the proactive operations, resulting in significant custodial sentences.

How can people recognise where sexual exploitation is taking place?

We offer literature and information via our websites to highlight the signs of Child Sexual Exploitation and how to get help.
For instance, some offenders may use gifts to encourage young people to engage with them and is one of a number of indicators.

There will be acute cases of children subject to ongoing abuse and those children whose lifestyle and association means they are at risk of sexual exploitation.

Does technology make this offence more difficult to identify?

Although technology enables such offences to take place online through chat rooms and other mediums, it also leaves offenders open to being caught. We monitor these sites and where there is evidence of Child Sexual Exploitation, we can take action by seizing equipment such as computers and mobile phones. These strengthen the weight of evidence against the offenders.

From a preventative perspective, we also have nationally trained officers who work in schools to alert them to the online dangers and how to recognise the potential for grooming.

The Force's 'Know the Signs' campaign aims to advise everyone across West Yorkshire of the typical signs of child sexual exploitation and what they should do if they know a young person who might be a victim.

The campaign is supported by Safeguarding Boards across the five districts of West Yorkshire and takes the form of impactive posters and advice cards, social networking messages and a hard-hitting radio advert.

Even something that seems like normal teenage behaviour could be a sign that a child is being sexually exploited.

Some of the visible signs include: 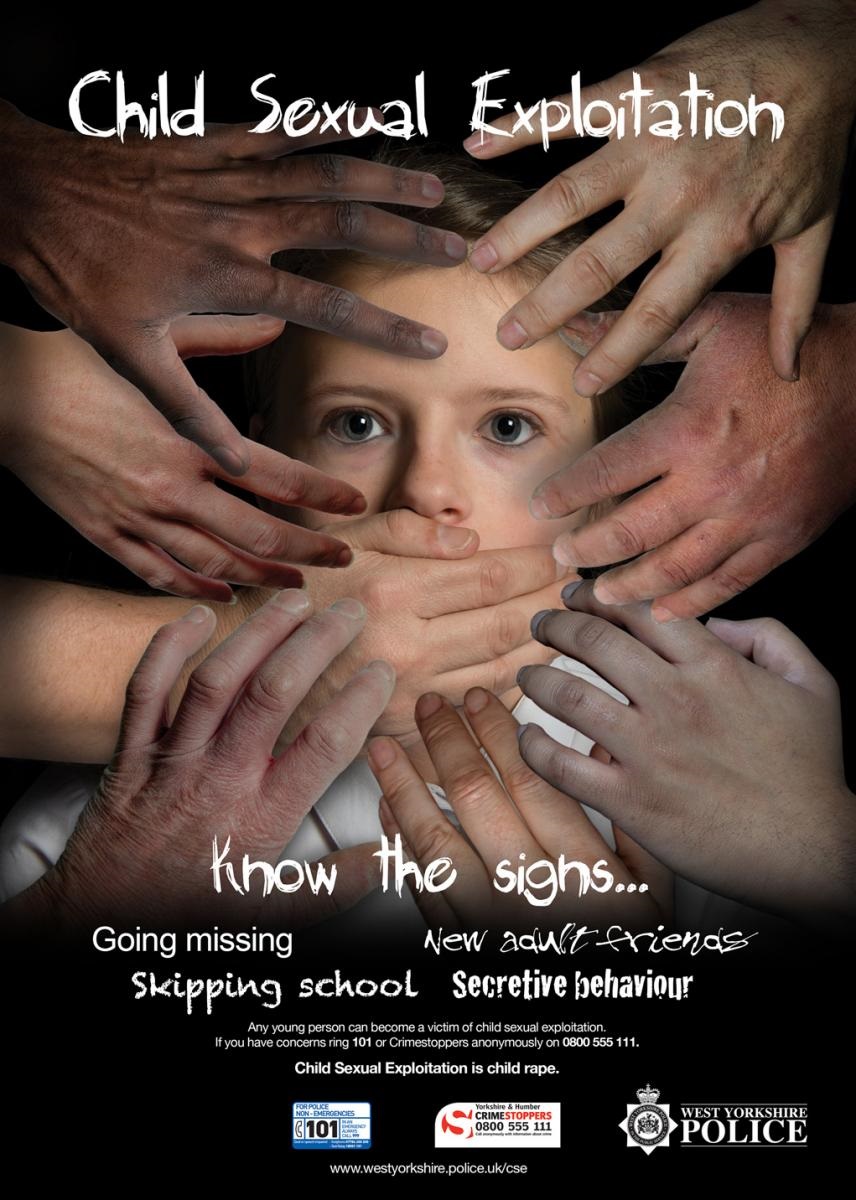 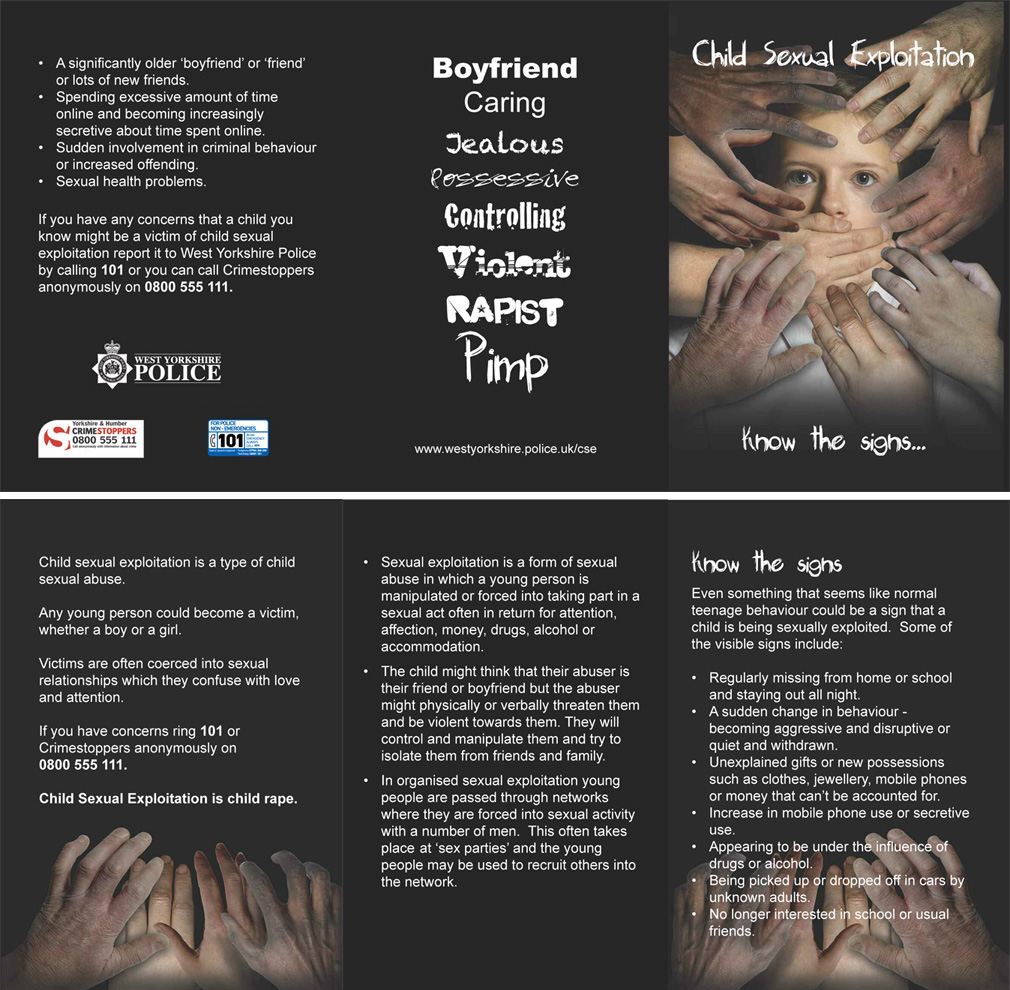 Jo was fourteen when she met Ash. They got on great. He bought her presents and said she was special.

It didn't matter he was a bit older. He said he loved her, Jo was happy. But then he started asking her to do things she didn't want to.

Jo was scared and alone. She told her mum, her mum told us, now Ash is in prison and Joe is getting her life back.

What can I do if I think a child is at risk?

If you have any concerns that a child you know may be a victim of Child Sexual Exploitation report it to West Yorkshire Police by calling 101 or you can call Crimestoppers anonymously on 0800 555 111. In an emergency or if a crime is ongoing always dial 999.

Deaf, hard of hearing or speech imparied people can use textphone 18001 101.

You can also call or email your local Police Safeguarding Unit to discuss any concerns or questions you have with one of our specialist staff on the contact details below:

Other charities and agencies that can help:

CEOP
Information for children, adults or teachers on staying safe on the internet
http://www.thinkuknow.co.uk

Yorkshire MESMAC
Project works with men and boys involved in or at risk of becoming involved in sexual exploitation, aged 25 and under and living in Leeds or Bradford.
0113 2444209
www.mesmac.co.uk

The Children’s Society in Keighley and Bradford
The Hand in Hand Project
Supporting young people involved in child sexual exploitation or who are vulnerable to grooming.
01535 606868
www.childrenssociety.org.uk/hand-in-hand
[email protected]

Parents Against Child Sexual Exploitation (Pace)
Working alongside and supporting parents and carers whose children have been sexually exploited.
0113 240 3040
[email protected]
www.paceuk.info

A registered child protection charity which works across the UK to prevent child sexual abuse. It runs many projects, including Stop It Now! UK and Ireland and Parents Protect!
http://www.lucyfaithfull.org.uk/

The latest toolkit from the Lucy Faithful Foundation:

The Foundation ensure that the response to children and their families who have suffered harm via the internet and mobile technologies is based on sound, evidence based practice.

Find their latest booklet for parents on 'Sexual abuse online':

Kayleigh's Love Story is a film about aspects of the last 13 days of the life of 15-year-old Kayleigh Haywood.

The Leicestershire schoolgirl was groomed online by Luke Harlow, a man she had never met, before being raped and murdered by his next door neighbour Stephen Beadman.

The film has been made to serve as a warning to children and adults of the dangers of grooming and sexual exploitation following Kayleigh’s tragic death in November 2015.

Performing Arts students from Airedale Academy in Castleford use their acting skills to raise awareness of Child Sexual Exploitation.

West Yorkshire Police have worked alongside them to create videos revealing a victim’s perspective.

"We thought she was going out with friends, but her attitude changed, her appearance started to change and she constantly had her mobile phone in her hand."

Just one of the anonymous accounts from a hard hitting video, featuring local parents whose children have been victims of child sexual exploitation (CSE)

It forms part of the ongoing West Yorkshire Police campaign entitled ‘Know the Signs’ which highlights the various indicators of the crime.

The Force has worked in partnership with local charity (Parents Against Child Sexual Exploitation) Pace to record their experiences and raise awareness of the issues.

YouTube Video - "We went from a happy, easy going family, to absolute torment"

Parents talk about Child Sexual Exploitation - a sneak preview of a new video.