West Yorkshire Police would like to raise the awareness around drugs and their link to serious organised crime (SOC) with hope that drug users may rethink their decisions.

Know Who You Are Dealing With

Many recreational drug users will have a drug dealer that they are familiar with, it may in fact be a friend, or someone that they have used over a number of years, someone that they see as ‘reliable’, ‘trustworthy’. However, users should be aware that drug use/supply is not a victimless crime and even low level drug dealers will be linked to other areas of serious and organised crime (SOC).

Drug users may struggle to believe this, as there is a disconnect between the user and the SOC that takes place further down the line. Many users will not realise that their drugs may have been trafficked into and around the UK via vulnerable adults and children. Vulnerable people are also used to sell and produce drugs, for example, there is a trend of Vietnamese nationals being trafficked and coerced into cultivating Cannabis.

The truth behind drugs is that they are linked to violence, child criminal exploitation (CCE), Child Sexual Exploitation (CSE), Human Trafficking (HT) and Modern Slavery (MS), Firearms, and other areas of SOC – drugs have been through a lot before they end up in the hands of the user. WYP would like to raise the awareness around drugs and their link to SOC with hope that drug users may rethink their decisions.

To find out more please see the following link: https://www.westyorkshire.police.uk/precision

Children are often used by organised crime groups involved in drug supply to sell, traffic or store drugs, as well as other criminality relating to the enterprise as such as serious violence, burglary and theft of vehicles. Children will be groomed from a young age and it may be months/years before they are asked to commit crime. Children may also be linked to the group through family or close friends. Any child can become a target, from any background and any ethnicity. Those that may be more likely to be targeted are:

Children are used by drug supply groups to avoid detection by the Police, and to ensure this children are often asked to store the drugs internally. This method can be very painful and extremely dangerous – it would only take for one package to burst and the child could be in a serious life-threatening condition. They will be asked to traffic the drugs this way from one area to another. We have found children in locations far away from their home address for the purpose of selling drugs. These locations are usually in a poor state of repair and can contain weapons, faeces and drug paraphernalia as such as used needles.

Children involved in gangs/organised crime groups are often drug users, sometimes this may have been the case before and it may have been one of the reasons that they are recruited. However, in other cases children may have started using drugs after recruitment, possibly as a way to ‘fit in’ or 'prove' themselves to the group. Using and being involved in the supply of drugs naturally leads to further risk taking behaviour.

We have seen an increase in children being used for ‘Squaring’ which is a slang term used for when an organised crime group exploits vulnerable people for their bank account details in order to launder money. Children may not see this as a crime because it will be advertised as an easy, legitimate way for them to make money, e.g. the group will deposit £100 into the child’s bank account who then keeps £5 of that money before it is passed on to another vulnerable adult or withdrawn for the organised crime group. Money laundering is a crime and can result in closure of bank accounts as well as a ban from opening future accounts.

Exploited children are unlikely to see themselves as victims, especially at first as a result of receiving gifts/rewards for ‘proving’ themselves to the group. Organised crime groups will gift children with money or materialistic items, as such as trainers, as a way to groom the child and gain their trust. Once trust is gained the group will then introduce the child to crime. Often, by the time the child recognises that they are being taken advantage of they find themselves indebted to the group and the group may also threaten violence against the child or close relatives. During the grooming process the group will encourage the child to push away from positive peers/role models. All of this makes it very difficult for the child to leave the group. 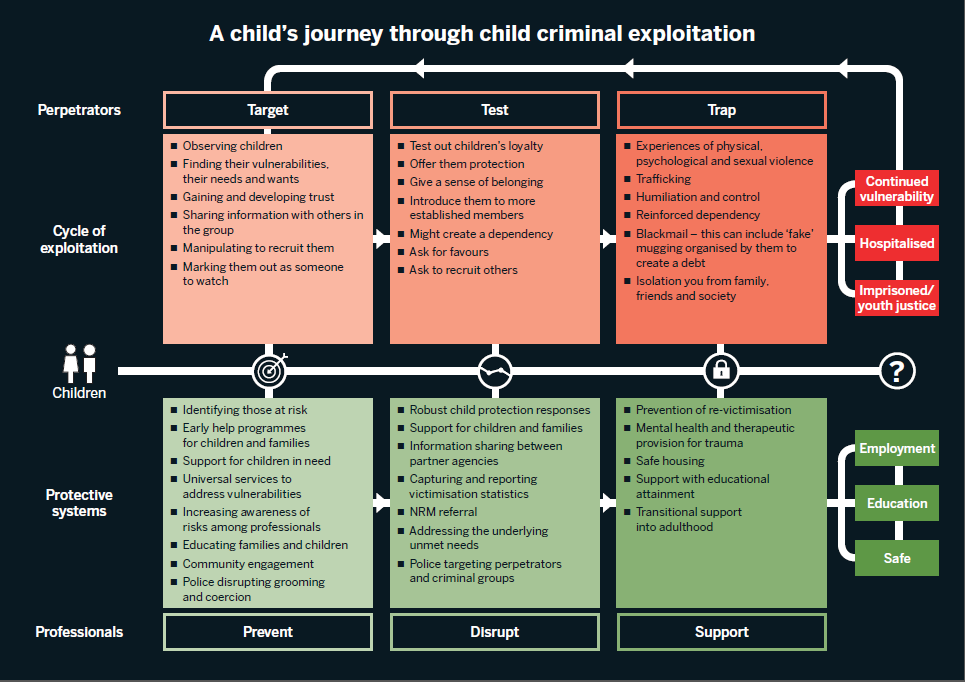 In addition to the above, children can also be sexually exploited by organised crime groups. They may develop relationships with older members of the gang, and then be asked to recruit other children by building a relationship with them. Children may be asked to complete sexual acts in exchange for drugs, or to pay off drug debts for themselves or others. Sexual exploitation can cause permanent damage to the child – physically and mentally.

As stated previously, children involved in gangs/organised crime groups are often drug users, this as well as being involved in drug supply leads to further risk taking behaviours. The disinhibiting effect of drug use means children are more likely to become involved in non-consensual or under age sexual acts. Frequently the rapes and other serious sexual offences reported to the police are from children who were under the influence of drugs at the time. In some cases children may be given drugs to take for the purpose of rape/sexual assault, with or without them knowing that they have taken drugs.

Furthermore, drug use can remove capacity to provide true consent. This is also a risk for suspects who may believe they are engaging in a consensual sexual act with somebody aged 16 or above but the drug fuelled circumstances may remove true consent from the victim and lead to mistakes being made in judgement of age. This puts the suspect in a position where arrest and prosecution is a possible outcome of what they believed was a legal sexual act.

The exploitation of vulnerable children and vulnerable adults by organised crime groups in order to engage in drug supply has been recognised nationally and is termed “County Lines”. The term is used to describe the situation where a group supplies drugs from an ‘urban’ to a ‘rural’ location and often involves exploiting young people in order to carry out the activities. The established ‘network’ operates by using a branded mobile phone line and supply lines for drugs. Young and vulnerable people are exploited by means of violence, intimidation and coercive control in order to move and deal the drugs and cash. Transporting people from one area to another for the purposes of forced labour (in this case, supplying drugs) is human trafficking/modern slavery.

Some vulnerable adults are being exploited in order to cultivate Cannabis, particularly Vietnamese nationals who are being trafficked and exploited for this purpose. We are also seeing cases where vulnerable adult’s addresses are being taken over by organised crime groups so that drug supply and production can take place at the address, this is known as “Cuckooing”. The vulnerable adult may be manipulated to monitor the address or to move drugs from one area to another – becoming a human trafficking/modern slavery victim.

Drug supply and its links to other areas of SOC are a National issue. Recently MP Sajid Javid has called for a review to understand the link between drugs and violent crime.

Violence is linked to drug dealing and use in the following ways:

Firearms and knives have become a key facilitator of some drug trafficking networks, often resulting in violence on the streets of West Yorkshire. Over the last year (June 2018-June 2019) there were 59 firearm discharges in West Yorkshire, 23 of those were linked to a mapped Organised Crime Gang (OCG). The majority of mapped OCG’s in West Yorkshire are involved in drugs supply (68%), with 36% of those being linked to firearms. Knife possession has increased in West Yorkshire by 24.6% over the last year (June 2018-June 2019) which correlates with an increase in drug trafficking (16.5%) and drug possession (18.8%).

Drug suppliers/OCG’s will add adulterants (often known as ‘bash’) to maximise their profits, i.e. the more adulterants they add, the more product they have to sell. As a result, purity levels of drugs can vary which is usually dependant on how many suppliers have been involved down the supply chain to the user. Examples of adulterants added into powder cocaine are Benzocaine (used in dentistry medicine), Levamisole (medicine to treat parasitic worm infections) and caffeine. Adulterants in other drugs can include paracetamol, cement, brick dust, caffeine and hydrochloric acid. Drug users may think they are buying ‘pure’ products when in fact purity levels can vary.

There are also cases where drugs are being sold as something they are not, for example Alpha-PVP has been sold as MDMA at a festival this year which resulted in 3 young people being hospitalised in a serious condition. Alpha-PVP is a hallucinogenic stimulant drug. Symptoms of use include psychosis, distress, severe paranoia, fast heart rate, agitation, high blood pressure, hallucinations and delirium.

Impact on the Environment

Drug production can involve the introduction of chemicals that can be extremely harmful to the environment. Drug cultivation (e.g. farming Coca leaf) has played a large role in deforestation and having a negative impact on some of the world’s most biodiverse ecosystems. NCA ran a similar campaign (Every Line Counts) in 2015 which stated that for every kilogram of Cocaine an acre of rainforest is destroyed. The NCA campaign had a supporting video which goes into further detail:

To report crime through to us there are the following options:

Crimestoppers is an independent charity that gives people the power to speak up and stop crime – 100% anonymously. Crimestoppers work in partnership with the Police to pass on anonymous pieces of intelligence. We (West Yorkshire Police) will never be told who has reported the intelligence through, giving you the confidence to pass on vital information without a trace back to yourself. You can report crime through to Crimestoppers via:

Drug and alcohol services are available in local districts to provide advice and support to drug users. There are also other support services as such as Narcotics Anonymous (NA) and websites for advice as such as Talk to Frank, please see below for more information:

Supporting Materials for Professionals and Parents 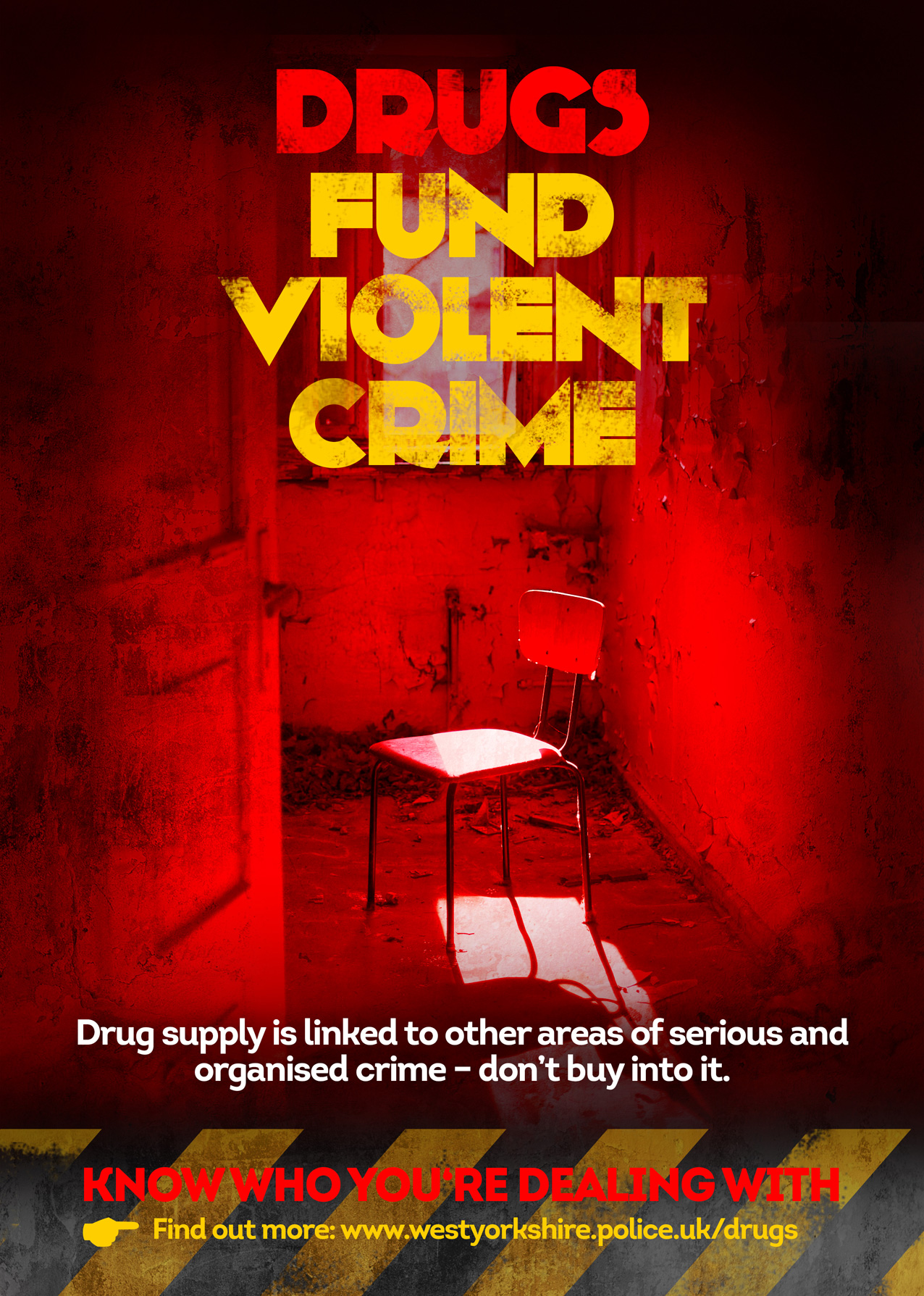 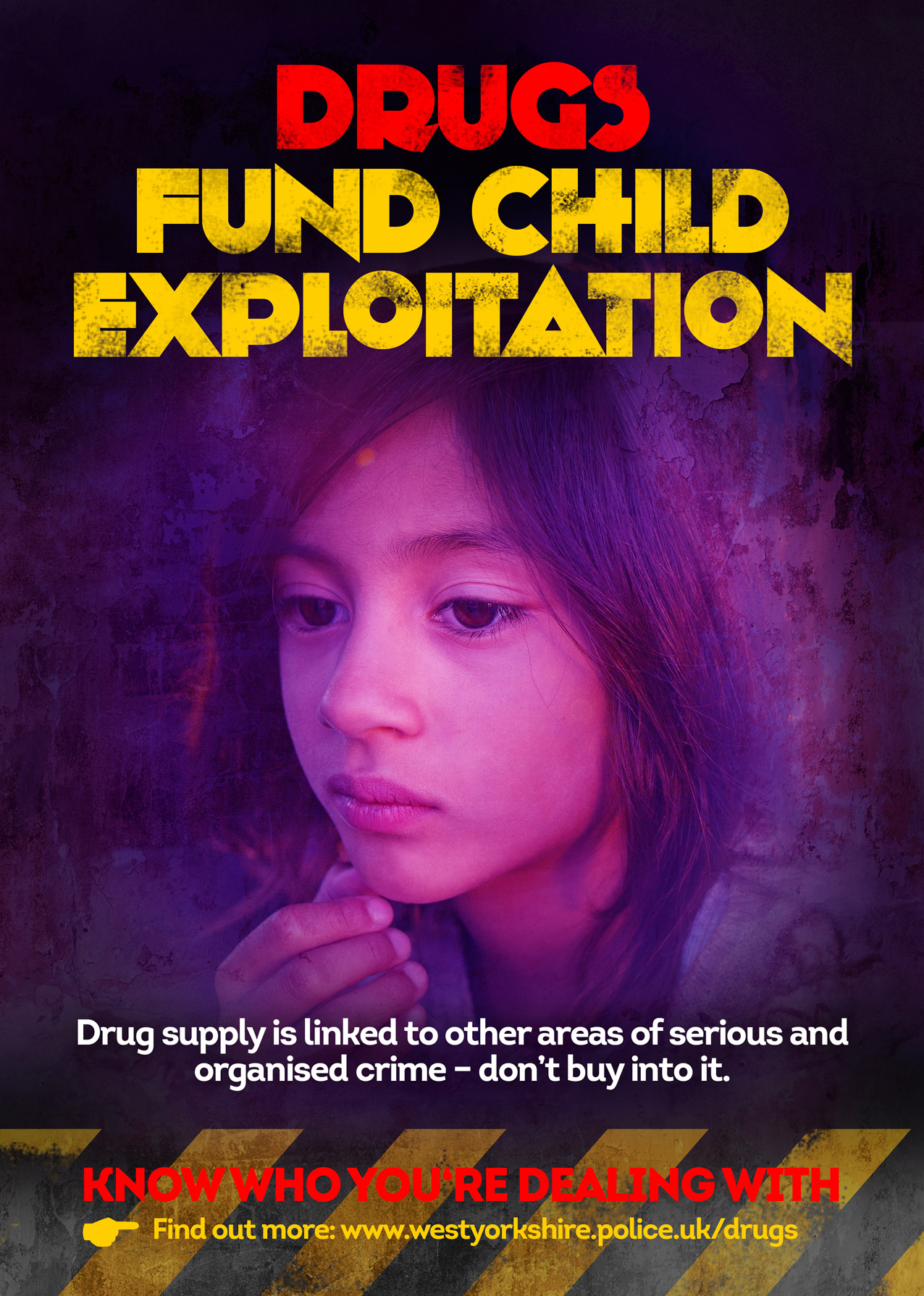 The max sentence for Class A drug supply is life. Latest yearly stats showed that 56 people died with MDMA in their system. 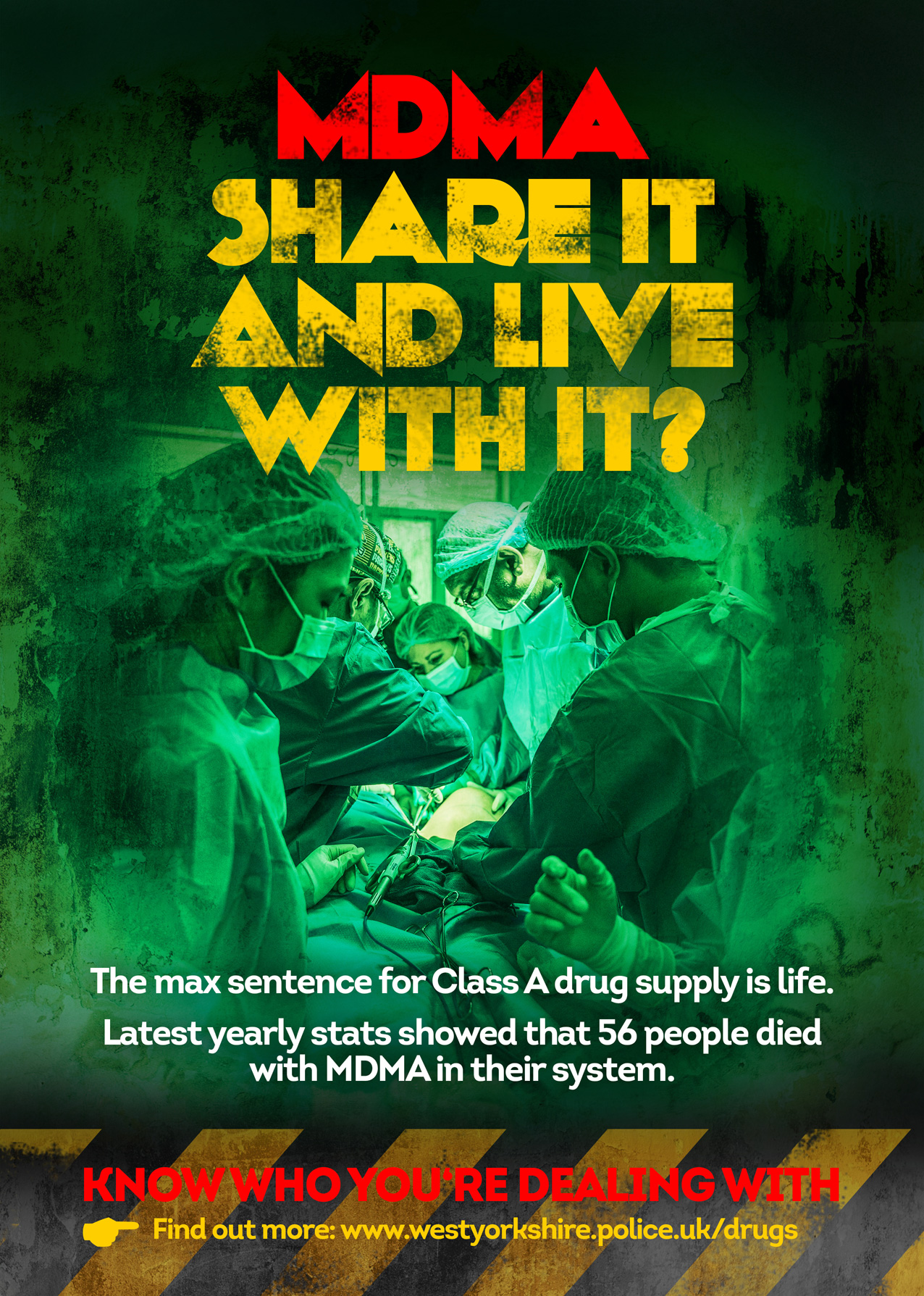 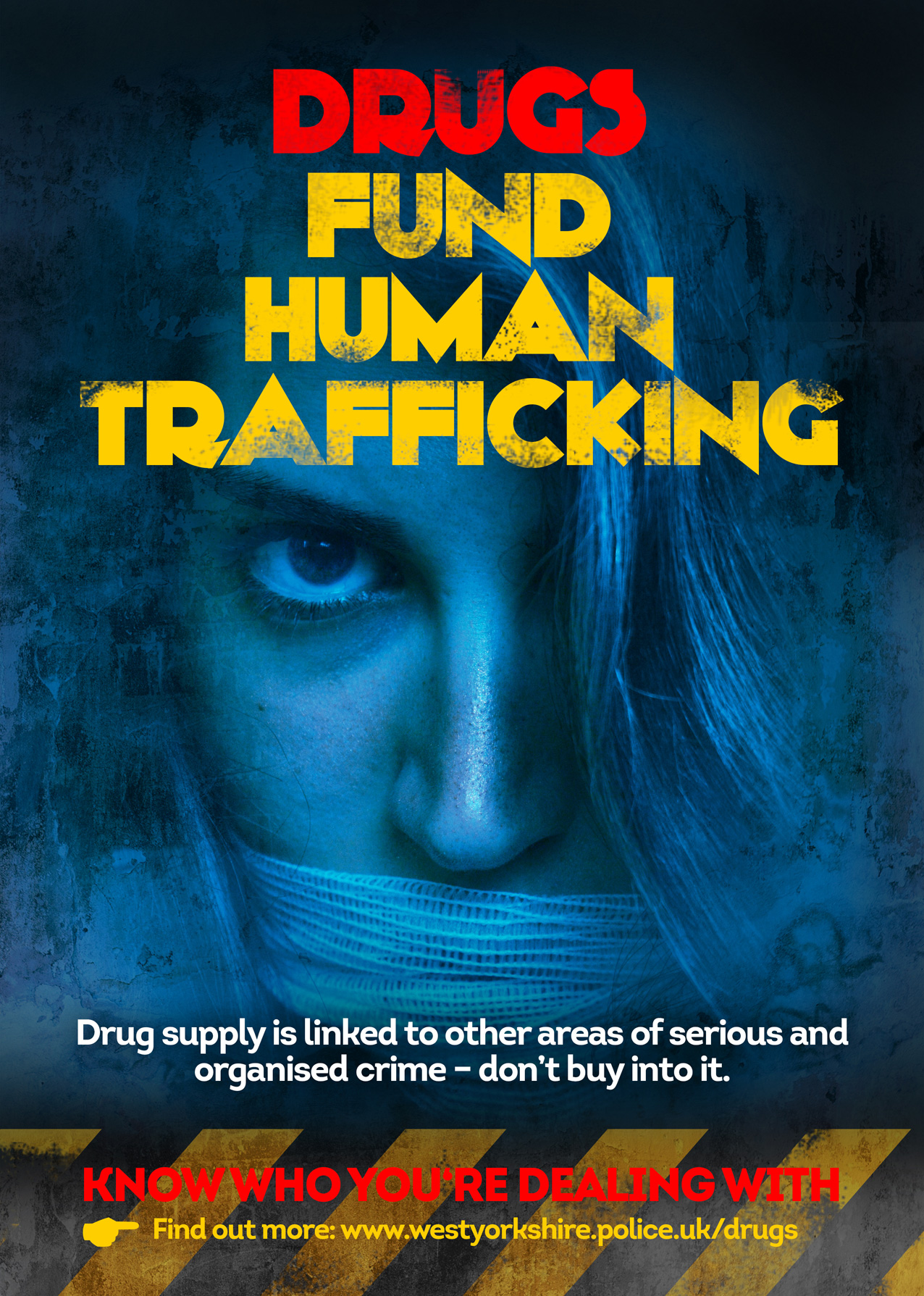