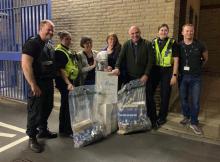 Three councillors from Kirklees Council also joined the night operation in the town centre on Thursday 11 July with the aim to target illegal activity within both licensed and non-licensed retail shops.

Cllr Andrew Cooper, Cllr Karen Allison and Cllr Susan Lee-Richards got to see first-hand the work and expertise which go into planning and conducting these types of operations.

A total of eight premises were visited during the operation that had been highlighted through intelligence from the community and partner agencies.

Of these eight shops, officers uncovered three dangerous abstractions of electricity, which was a danger to the premises, staff, customers and the nearby area; as well as being illegal.

An emergency call-out was made to Northern Power Grid to ensure the premise supply was safe.

Results of the operation:

PC Steve Nicholls, who led the operation, said: “The operation last week was incredibly successful and we were able to take thousands of illegal tobacco products and weapons off the streets of Huddersfield.

“We will continue to work closely with our partner agencies to tackle organized criminality in Kirklees.

“I would like to thank all three councillors who joined us on the evening for their support and also thanks to all our partner agencies who assisted and supported planning the operation and on the night itself."

David Lodge, Head of West Yorkshire Trading Standards, said: “Illegal Tobacco is often less than half the tax-paid price of legally sold tobacco, and this maintains smokers in their habit and encourages young people to start smoking. Far from being a victimless crime Illegal Tobacco trading creates a cheap source for children and young people and encourages adults to continue smoking by eroding cost motivation to quit. It is also linked to organised crime and contributes to an underground economy worth hundreds of millions of pounds.”

Cllr Karen Allison, said: “It was great to see first-hand the work done by Kirklees Licensing, West Yorkshire Trading Standards and the Police in tackling the criminal activity in our town. Many thousands of pounds worth of illegal cigarettes and tobacco was seized that night in what was a very professional operation. It was certainly an eye opener into the world of organised crime and one I won’t forget.”