More than 1,300 cannabis plants have been seized after officers discovered a drugs factory spread across a Dewsbury building.

The Dewsbury and Mirfield Neighbourhood Policing Team are encouraging residents to keep reporting drugs activity in communities after making the seizure at a large commercial property on Daisy Hill in Dewsbury. 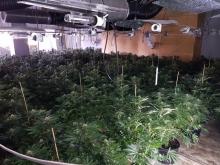 Officers executed an early morning dugs warrant at the property on Thursday (16 April) and discovered in excess of 1,300 plants in various stages of growth spread across two floors of the building

A 44-year-old man was arrested at the scene in connection with the discovery and remains in police custody,

Officers remained on scene throughout the day while CSI work was carried out and electrics in the building where made safe.

Sergeant Shaun Oates of the Dewsbury NPT, said: Enquiries are ongoing today regarding this substantial cannabis seizure which also resulted in the arrest of a man at the scene.

“I want to thank residents who contact us with information about drugs manufacture and dealing in Dewsbury and urge them to keep doing so.

“This raid demonstrates that we will and do take action and all information and intelligence which we receive is fully looked into.”

Anyone who has activity about drugs offences in Dewsbury can contact the Dewsbury and Mirfield NPT on 101 or give information online at www.westyorkshire.police.uk/101livechat

Information can also be given in complete anonymity to the independent Crimestoppers charity on 0800 555 111.