Police are appealing for information following a burglary where the suspect posed as a workman.

The incident happened on 12 September at around 2pm at a house on West Park Road in Batley. 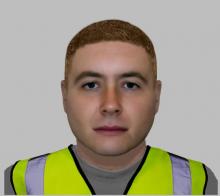 A suspect posing as a workman came to the house, where an elderly lady answered the door. He asked for the water in the property to be shut off and whilst inside the house, he stole money for the occupant.

He fled from the house on foot.

The suspect is described as a white male, aged between 30 and 40, 5ft 8” and wearing a fluorescent tabard and spoke with a local accent.

Anyone who recognises the person in the Efit image, or has any information is asked to contact the police via 101 quoting crime reference number 13190468144 or information can be passed to Crimestoppers anonymously on 0800 555 111.