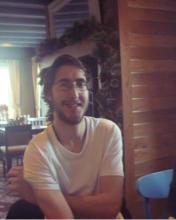 Police are appealing for anyone who sees a missing Leeds man to get in contact.

Macauley Racz, 25, was last seen on Main Street, Garforth at 320pm on Wednesday 14 October. The last known contact with him was yesterday (Friday 16 October)

Officers are becoming increasingly concerned for his welfare.

Macauley is described as white, 6’2” tall and with a beard (thicker than it is in the photo). When last seen he was wearing a hooded top, black North Face parker jacket with a fur hood, black bottoms and Timberland boots.

He does not have his glasses with him (he is wearing glasses in his photo)
Macauley is thought to be in the Manchester area.

Anyone who sees him is asked to call police on 101 quoting log 1510 of Wednesday 14 October.