Batley Man Jailed for 14 Years For Multiple Counts of Rape

A Batley man has been jailed for 14 years for multiple counts of rape and false imprisonment. 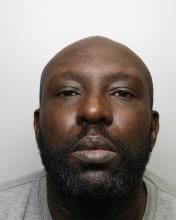 Anthony Pinnock, aged 42, from Batley was found guilty following a trial and was today (11 October) sentenced at Leeds Crown Court.

He was found guilty of seven counts of rape, one count of sexual assault and one count of false imprisonment.

The offences occurred between 2017 and 2019 and against one woman.

He was sentenced to 14 years in prison and has been placed on the sex offenders register for life.

Detective Inspector Damian Simpson, of the Kirklees Safeguarding Unit, said: “I would like praise the victim for her bravery and courage in coming forward and reporting these terrible crimes.

“I hope that the conviction and today’s sentencing helps to bring some closure to her and that she can look forward to the future.

“I would also like to recognise the dedication and tenacity the detectives involved in this investigation, which has once again highlighted their continued commitment to our communities.

“Anyone who has been the victim of sexual abuse should feel confident in coming forward to the police. We have specialist teams who will take you seriously, deal with you sensitively and do everything within our power to bring those responsible to justice.”