A man has been jailed for seven years after being convicted of multiple counts of indecent assault of children. 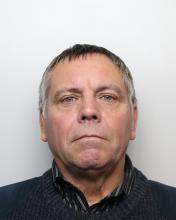 The dates of the offences date back to the 1980s and 1990s against four female victims aged between 5 and 15-years-old.

Police began an investigation after one of the victims came forward and reported the abuse in August 2016.

He was charged with 8 counts of indecent assault.

Calder stood trial at Bradford Crown Court starting on 7 December this year and it was a unanimous guilty verdict from the jury.

Detective Constable Charlotte Grose, of Bradford Safeguarding Unit, said: “Following a trial at court, we are pleased that Calder was found guilty and sentenced to a lengthy stint in prison for his crimes.

“All four of his victims bravely gave evidence in court and I would like to thank them for their patience throughout the court process and commend their courage for not only coming forward and reporting the abuse they suffered, but also for standing up in court to give their evidence.

“Anyone who has suffered any form of abuse is encouraged to come forward and speak to the police. We have a specialist team of officers who can listen, help and support you and bring the perpetrators to justice.”