Castleford Man Who Filmed His Own Domestic Abuse Offences Jailed

A Castleford man has been sentenced to more than 11 years after being jailed for offending including an attempted grievous bodily harm assault on a woman which he recorded on his own CCTV. 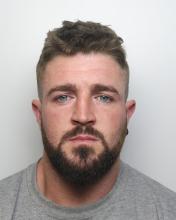 Stefan Carr, (28) of Carlyle Crescent in Castleford received an 11 year, three month extended sentence at Leeds Crown Court today (23 September) for offences including an incident in May this year in which he seriously assaulted a woman in his property.

Carr pleaded guilty to an attempted Section 18 GBH assault in May as well as two prior section 47 assaults against another female victim in other incidents.

The court heard he subjected his victim in the May offence to a three hour ordeal at a property on Carlyle Crescent in the early hours of Sunday 5 May, 2019.

The 28 year-old had rigged his home with CCTV cameras which captured the full incident, providing footage which proved a factor in his guilty plea.

Among the offences shown in the CCTV was that of Carr preparing a noose, which he then hung the victim from.

The 5 May incident came to an end after the victim was able to flee from the suspect after he had forced her into a van parked outside.

Officers were arriving at the scene after being called by a neighbour and arrested Carr.

Detective Chief Inspector Vanessa Rolfe, Senior Investigating Officer in the case, said: “Carr subjected his victim to a lengthy and terrifying ordeal and we welcome his sentencing at Leeds Crown Court today.

“His victim was truly put in fear of her life by the violence of his actions, and we commend her bravery in both escaping and in supporting the prosecution against him.

“We are glad his guilty plea has saved her the ordeal of providing evidence, but it must be noted that the strength of the case against him did in part come from Carr effectively recording and documenting his own criminal acts.

“Hopefully his victim will now take some comfort from seeing him put behind bars."

She added: “We would always encourage victims of domestic abuse to come forwards and contact us.  We can promise that all reports will be dealt with sympathetically and fully investigated."