A dangerous driver from Bradford who is also thought to have links to drugs supply in the district has been banned from the city centre for ten years.

Wajid Hussain, of Cunliffe Terrace, was jailed last month for 12 months after he led police on a chase around the Manningham area in June last year.

On top of his prison sentence the 26-year-old has now been served with a Criminal Behaviour Order, which not only prohibits him from entering the city centre for the next decade, but also says he must not be seen associating publicly with seven other individuals.

The order was sought after police obtained evidence suggesting Hussain was involved in the supply of drugs, most notably in Bradford city centre where he was regularly seen travelling with his associates in high performance vehicles.

Any breaches of the order may result in Hussain being returned to prison.

“While Hussain has no convictions for drugs the Bradford District Anti-Social Behaviour Unit were able to present evidence to the Judge which suggested he was involved in supplying illegal substances to people in the city centre.

“Drug suppliers and dangerous drivers are not welcome in Bradford and we hope this lengthy ban sends out a message to anyone who thinks they can enter the city centre to commit crime.” 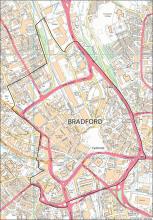 "It is important that people feel safe and happy to come here and go shopping or visit attractions and not feel harassed or threatened in any way.

“We want to send a clear message out that anti-social behaviour and drug dealing will not be tolerated.”