A man from Heckmondwike has been jailed for more than 13 years for multiple sexual offences against children.

Michael Freeland, aged 68, pleaded guilty at a court hearing in April to eight counts of sexual activity with a child under 15. 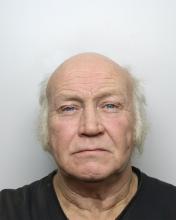 The offences relate to two victims and took place between 2017 and 2018.

Today (20 May) Freeland was sentenced to 13 years and 6 months in prison and he has been subject of a Sexual Harm Prevention Order.

PC Claire McMahon, of Kirklees Safeguarding Unit, said: “We welcome the sentencing of this depraved individual who abused children and preyed on the vulnerable.

“His victims showed incredible courage coming forward to the police and reporting these serious offences they suffered by him.

"We would always encourage all victims of sexual offending whether recent or non-recent to come forward and speak to the police. We remain committed to finding justice for all victims and all reports will be handled sensitively and investigated thoroughly by specially trained officers.”