Drugs Worth Tens Of Thousands Seized in Police Raid, Huddersfield

Drugs worth tens of thousands of pounds have been seized by Huddersfield Police in the second large cannabis factory raid in Kirklees in seven days.

Enquiries remain ongoing after officers from the Huddersfield Neighbourhood Policing Team seized 68 large cannabis plants worth a potential £30,000 from a drugs factory in Percy Street, Fartown.

The latest seizure means that hundreds of plants worth over £130,000 have now been seized in less than seven days by officers in the district.

Officers from the Huddersfield NPT executed a warrant at the Percy Street property on Sunday afternoon ( 9 August) and found cannabis and growing equipment. 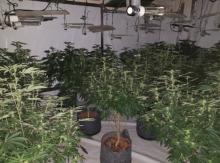 The fully operational cannabis factory was located across 6 rooms in the property.

All of the drugs were recovered and work was carried out to dismantle the drugs factory.

A 21-year-old man was also arrested on suspicion of possession with intent to supply drugs and remains in police custody today for questioning. 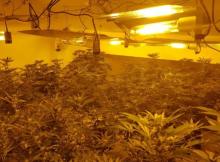 Sunday’s warrant followed the seizure of around 400 cannabis plants at a former commercial property on Bradford Road on the outskirts of Dewsbury town centre on the evening of Sunday August 2.

Officers from Kirklees Police attended the location following a report of suspicious activity there and on entering the building found a three floor cannabis factory, containing cannabis with a predicted street value of over £100,000. 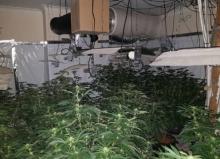 Insp Graham Dyson of the Huddersfield NPT, said: “Developing the information around drug cultivation is paramount to dealing with organised crime.  Cannabis farms aren’t easy to set up, and require time and money to establish.  The two cannabis farms my officers and colleagues located in Huddersfield and Dewsbury were both of a sizeable scale and police enquiries remain ongoing in both these investigations.

“Officers are already working on the next location and we will continue to review all information and develop this to bring those involved to justice and break up the organised criminal gangs who profit from drugs.

“I want to thank those who contact us with information about suspected drugs production in their communities and encourage them to keep getting in touch.

“Information about drugs crime in Huddersfield can be given to my NPT directly on 101 online at www.westyorkshire.police.uk/101livechat or in complete anonymity to the independent Crimestoppers charity on 0800 555 111.”