Pedal powered PCSO’s have taken delivery of new wheels to help them catch hard to reach criminals in the Huddersfield area.

Officers from the Huddersfield Neighbourhood Policing Team have been given two new electric bicycles for patrolling in the Almondbury, Newsome and Lindley Wards thanks to funding from Newsome Ward Kirklees councillors. 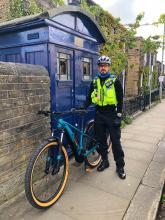 The environmentally friendly bikes will complement well-worn models currently in use and will particularly help officers mount patrols in hilly and hard to reach areas.

These include ginnels and tracks, which can be favoured spots for anti-social off road riders but are hard to patrol by car.

It is expected the new bikes will clock up an average 30 miles a day when in use by officers, and will be mainly for anti social behaviour patrols.

Insp Graham Dyson (Huddersfield NPT) said, “These two new electric bikes are an excellent resource for my officers, enabling them to cover a vast amount of distance and patrol a variety of areas to target ASB and crime hotspots.

“Officers can get in and around a lot of inaccessible areas included alleys and wooded areas where patrol vehicles cannot access and it is impractical to patrol on foot.

“We have regular incidents of crime and ASB where officers on electric bikes can get there quickly and track offenders around the area.

“This can include ASB caused by off-road motorcycles, and although officers can’t pursue they can regularly get close to offenders and subsequently identify the suspects from their Body Worn video. 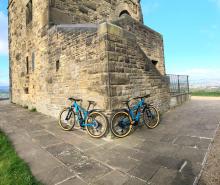 “I would like to thank the ward councillors for funding the bikes which I know will be a fantastic resource for reducing crime and ASB."

Cllr Cahal Burke said: “We are delighted to be able to provide financial support to the police to help them carry out their duties in the community. The electric bikes will add real value. They will allow police officers to be able to cover longer distances in a shorter amount of time than a conventional bike. They will also offer increased mobility and it will be easier for officers to traverse certain areas than motor vehicles– for instance, it will allow them to easily access alleyways and ginnels. Potentially, the bikes will improve response times.”

Cllr Anthony Smith said: “I believe that the electric bikes will prove to be a useful tool, increasing speed and range for situations where a pedal bike would not be as suitable. Used strategically, they can also enable officers to utilise a stealth approach, allowing them to approach offenders without having a car engine to alert them. They could really increase the effectiveness of patrol personnel.”

Cllr Richard Eastwood said: “The electric bikes will allow police officers to have more personable interactions with the public. I think it will break barriers and allow officers to be more approachable to the public. In the current situation we are in, the police have a hugely important role, particularly in terms of neighbourhood patrolling and crowd management. Community engagement will be vital and these bikes will definitely help support this process.”

Cllr Andrew Cooper said, “"Newsome Ward Councillors are pleased to be able to support the Police by helping fund these speedy and environmentally friendly electric bikes. It means police on patrol will be both mobile and visible in our hilly part of the world. This is a particularly trying time for the police and if there is anything we can do to make their work easier it is money well spent"

Cllr Alison Munro said, “I am really pleased we have been able to fund these much needed e - bikes.  Going forward the officers will be better equipped  to do their job.”

Cllr Bernard McGuin said, “I think all councillors realise what a difficult job the police have. I am pleased that some of us were able to co-operate in order to help support our local force to be able to do their job a little more efficiently.”

West Yorkshire Police can be contacted via 999 for a crime in progress or 101 or at www.westyorkshire.police.uk/101livechat  for other incidents or information about offending.

Members of the public can pass information anonymously via the independent Crimestoppers charity on 0800 555 111.