Police are releasing an Efit image of a man they would like to identify in connection with a burglary in Bradford. 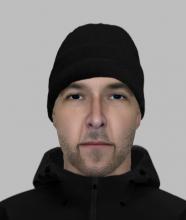 The incident happened on 14 October between 19:30 and 21:25 where a male suspect approached a house on Meadway in Bradford.

The homeowner answered the door and the suspect walks into the property and demands some money.

The female victim, in her 80s, gave the suspect a small amount of money and he left the house.

He then returned and barged into the house demanding more money, the homeowner refused, the suspect stole the victim’s purse and fled from the house on foot.

Anyone who recognises this man or has any further information is asked to contact the police via 101 quoting crime reference number 13200515764.