Detectives are releasing an Efit image of a man they would like to speak to in connection with a violent robbery in Heckmondwike. 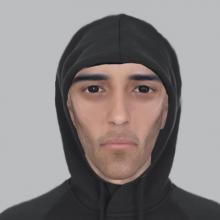 The incident happened on Monday 26 August at around 22:10 at a house on Leeds Old Road

A male suspect entered the house where the victim, a 53-year-old male and a friend were sat in the dining room.

The suspect takes some car keys and a handbag.

The victim confronts the suspect and an altercation occurs and both victim and suspect fall down some stairs into the garden.

The suspect gets into the victim’s car, a red Honda Civic, and before driving off from the scene, the car was driven into the victim causing cuts and bruises to his arms, legs and feet.

Anyone who witnessed the incident, recognises the man in the Efit image or has any further information is asked to contact the police online via www.westyorkshire.police.uk/contact-us or via 101 quoting crime reference number 13190437005.