World Day Against Trafficking in Persons is being marked by West Yorkshire Police as people are urged to know how to spot the signs in their neighbourhood or workplace.

Human Trafficking and Modern Slavery are crimes that could be happening in your area - on your street or where you work.

They are crimes that happen locally, nationally and internationally

To mark the day, Detective Sergeant Chris Rukin who works for the Force’s Modern Slavery Team has spoken out about his experiences as on officer on the ‘front line’ tackling these awful crimes and helping rescue victims.

“My personal experience with Modern Slavery started back in 2013 with an investigation into a case of Human Trafficking for forced labour. This all seemed very new at the time as there had been few if any cases like this before in West Yorkshire, not to mention the UK. However it also felt we were lifting a stone on an issue that had become deep rooted in our communities for some time as “hidden in plain sight”.

“We identified victims that had been exploited for over 5 years, working in the construction industry for as little as £5 a day. Up to that point no one had seen their plight and no one had helped them for all that time, although as in many cases that we see there were opportunities to do so.

“The victims in this case and like the majority of those in modern slavery offences are the most vulnerable in our society, suffering trauma and abuse before and during their exploitation and having issues with mental health, poverty and addiction, they are targeted and exploited for this very reason.”

And Chris was there from the start when in 2015, West Yorkshire Police was one of the first police forces in the country to create a dedicated Human Trafficking / Modern Slavery Team.

“Ultimately though we are talking about the control and exploitation of human beings for someone else’s benefit, lowering them to the value of a commodity that could be bought, sold and even discarded, stripping them of their basic human rights and entitlements.

“To resolve the problem we have to remove the environment for Modern Slavery to thrive and safeguard the victims of these crimes. It was recognised that this had to be a partnership approach, not just with other statutory agencies but with the public as a whole to tackle this issue. The creation of a partnership network by the West Yorkshire Police and Crime Commissioner, Mark Burns-Williamson, was a positive move to enable a joined up approach with other agencies, bringing together abilities and resources that would help achieve this.”

And what can people do to help?

“This is everyone’s responsibility and we are still heavily reliant on passionate individuals and teams to progress and make an impact in tackling this crime and safeguarding victims.”

To help people spot the potential signs of slavery the Force has issued advice, including what to do if you suspect something is wrong.

Possible signs to look out for:

For more advice and signs to look out for click here:

DCI Gaffney is in charge of the Modern Slavery Team - part of Programme Precision - and has recorded a short video about human trafficking to help people spot the signs.

“Particularly now, during the recent Covid-19 outbreak, workers are being displaced across work forces, and in many sectors, exposing them to an increased risk of exploitation, particularly across agriculture and food processing sectors.

“We all have a responsibility to take action as consumers of goods and services and as responsible members of our communities.

“We need to understand how to spot the signs of trafficking, slavery and exploitation and know how to report those concerns, especially at the earliest opportunity to identify and safeguard vulnerable people at real risk.

“My office helps to run and coordinate a West Yorkshire Anti-Slavery Partnership to strengthen local work and today sees the launch of new webpages on my website at https://www.westyorkshire-pcc.gov.uk/wyasp in support of the group. The pages contain a whole host of information and resources to help fight modern slavery.

“General indicators of human trafficking or modern slavery can include signs of physical or psychological abuse, fear of authorities, irregular activity at homes or addresses, poor living conditions and working long hours for little or no pay. By reporting suspicions you could be saving lives and preventing more misery.”

“Modern slavery is a horrifying crime that is happening behind closed doors and even right out in the open in our own communities. Those who are exploited often tell us that they feel like no-one sees them or hears them or cares – but we know that when members of the public know the signs to look out for, they do care and they will act. We would encourage absolutely everyone to pay attention to the common signs of trafficking that are being shared today and to be vigilant in their own communities. As consumers, if something seems too cheap to be true, take a step back and ask why that might be.

“Hope for Justice opened our first Hub in West Yorkshire in 2013 and we have worked closely with West Yorkshire Police and Mark Burns-Williamson as PCC ever since. I want to thank them for giving the issue of modern slavery the priority and focus it needs, while sharing best practice to other areas of the country.” 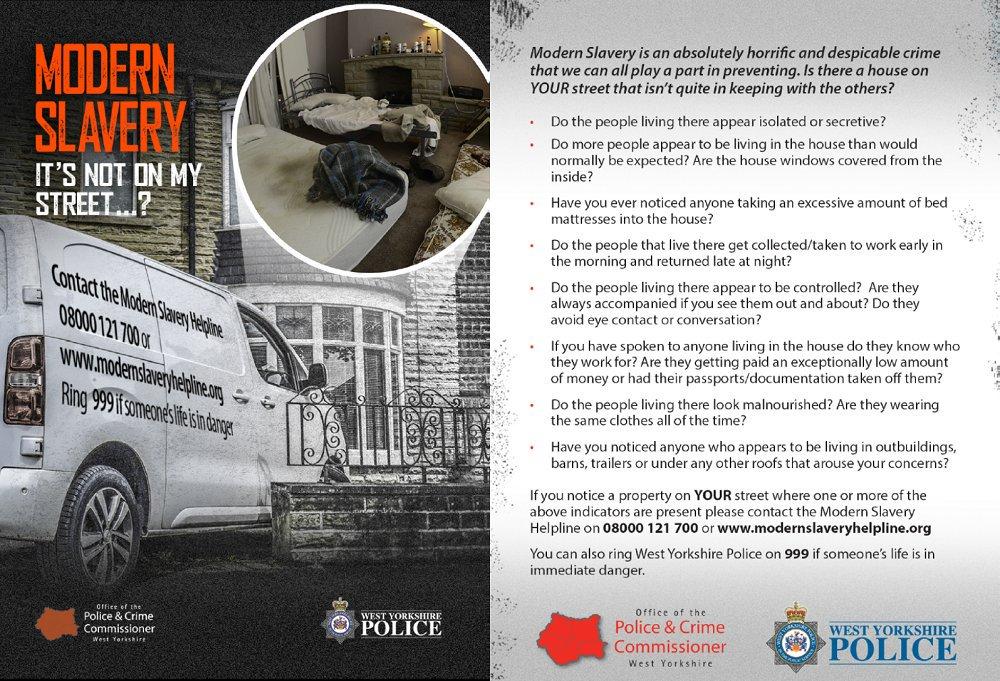