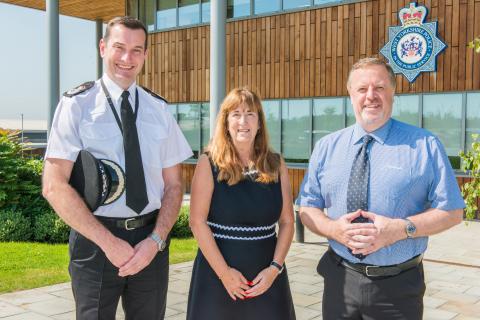 A new graduate scheme for those wanting to kick-start their career in policing has opened today.

The route will see graduates joining West Yorkshire Police on a two-year training programme, where you can focus on areas such as being a Detective, a Response Officer or becoming a specialist in our Neighbourhood Policing Teams.

You will be a police officer from day one, with training split between the Force’s training and development centre in Carr Gate, Wakefield and at Leeds Trinity University’s Horsforth campus.

Graduates will be paid a starting salary of £24,167 throughout their training, with the salary increasing to £26,371 once the training is completed.

“This is the first time we are recruiting on the new scheme for graduates, and it is an exciting time to train and develop your career following your degree.

“Being a police officer gives you some of the proudest days of your life. A career at West Yorkshire Police will open up so many opportunities to you, and there are countless opportunities to develop and widen your skills.

“If this is your first step towards a policing career – whether you are straight out of university or at a later stage in your life – this is the perfect time to join the police and to earn while you embark on a new career.

“We continue to work hard to increase our diversity within the Force and our recent recruitment campaigns have seen us attract a diverse group of student officers. We are continuing to look for those who can make a real difference in West Yorkshire and become positive role models; representing all communities and cultures across the county."

In order to apply, you need to have an Honours degree of any level in any subject and be able to pass a job-related fitness test.

At the end of the two-year course, graduates will also be awarded a Graduate Diploma in Professional Policing Practice.

Recruitment opens on 2 December and you can find more information on the West Yorkshire Police website here.

"As a University committed to employability in the region, we are delighted to offer this new graduate route into Policing.

“We are proud to be working with West Yorkshire Police on this new qualification, the Graduate Diploma, which will equip new officers with the skills and understanding required for a successful career in the Force."

“Continued recruitment into the police service is vital and something which I have always championed, particularly with the support of our communities through investment raised through the local police precept which has been a clear message in recent years.

“Policing is a very rewarding career and this is a fantastic opportunity for individuals to pursue a challenging and varied role. Successful candidates will also finish the training with a Graduate Diploma in Professional Policing Practice which comes into being next year as part of a national qualification framework.

“If you’re looking for a job that makes a real difference to people’s lives, that you can take pride in and be challenged by, then I would encourage you to visit West Yorkshire Police’s website for further information about how to apply and what it entails.”

West Yorkshire Police is an equal opportunities employer and our aim is to foster a diverse and inclusive workplace. We are committed to building a team that reflects a wide variety of skills, perspectives and backgrounds and encourage applications regardless of sex, gender identity, ethnicity, aged, sexual orientation, religion or belief and disability.

We hire solely on merit and the job will always go to the right candidate. If you require reasonable adjustments in any recruitment process with us, please let us know.

Recruitment is now open to join West Yorkshire Police, and for the first time police officers will study towards a degree as part of their training.

From today (Friday 13 September), the public can apply to become a Police Constable Degree Apprentice.

Under the degree apprenticeships, trainee officers will study towards a degree in Professional Policing Practice as part of a three-year training programme.

The training will be carried out at West Yorkshire Police’s state-of-the-art training and development centre at Carr Gate and at Leeds Trinity’s campus in Horsforth.

“We are delighted to open our recruitment window for our Police Constable Degree Apprenticeships for the first time.

“Being a police officer, you will quickly find that no two days are the same. It is both a rewarding and challenging role, but you will constantly be learning new skills, meeting new people and helping the most vulnerable in our community.

“The Police Constable Degree Apprenticeship is the perfect opportunity to ‘earn while you learn’, and will teach you how to deal with increasingly sophisticated crime.

“As you work through your apprenticeship, you can look to focus in areas such as being a detective, becoming a valued member of our roads policing unit, or becoming a familiar face in the community as a specialist in our neighbourhood policing teams.

“We are looking for a diverse group of people, who can make a real difference in West Yorkshire and become positive role models in our society.

“We are striving to better represent all of our communities and cultures at West Yorkshire Police, and so we would be particularly interested in hearing from applicants from a black, Asian and minority ethnic background.

“Our Force has become more representative of women, of those with disabilities and those from a LGBT background in recent years, but we are still making strives to see the same successes with our BAME communities.

“That being said, all applications will be based on merit and the job will always go to the right candidate.”

The starting salary for trainee officers on the Police Constable Degree Apprenticeship is £20,879, which will increase to a minimum of £26,371 after the three year training has been completed.

The first trainee officers are set to be appointed in July 2020.

“We are proud to be working with West Yorkshire Police, particularly during such an exciting time for the force, in training the next generation of Police Constables. Our programme of policing has been designed with senior police officers to be relevant, inspiring and impactful, and will be delivered by lecturers with experience working in the force and security services across the country.

“We are looking forward to welcoming the first ever West Yorkshire Police degree apprentices in July and encourage anyone thinking about a career in the force to apply.”

"Continued recruitment into the police service is crucial and something which I have always championed, with the support of our communities through investment raised through the local police precept.

“Policing is a very rewarding career and this is a really great opportunity for individuals to pursue a varied role while being trained and supported to gain a qualification at the same time.

“If you’re looking for a job that makes a real difference to people’s lives, that you can take pride in and be challenged by, then I would encourage you to visit West Yorkshire Police’s website for more details.”

The force will also soon be recruiting under the police constable degree holder programme, for applicants who already have a degree (in any subject). The training is over two years and officers will study towards a graduate diploma at Leeds Trinity University.

Which route is right for me?

Should I apply for the Police Constable Degree Holder Entry Programme?