A Halifax burglar has been jailed for more than six years after pleading guilty to burglary and a robbery in which he seriously wounded his victim.

Kenan Douglas (20) from Illingworth in Halifax was sentenced to six years and six months in jail at Bradford Crown Court on June 24 after admitting a series of offences including night time residential burglaries in the Pellon, Wheatley, Greetland and Calder Valley areas. 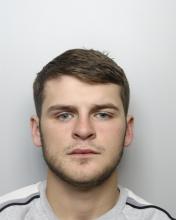 The burglaries took place over a 12 month year period.

He was also sentenced for an incident on Solstice Way on October 19, 2018 in which a victim tried to prevent him stealing a motorbike.

The 20-year old assaulted his male victim with a bladed weapon, causing him serious injuries before fleeing the scene

He said: “Douglas had been part of an group who had attacked property in his own community over a 12 month period and was not afraid to resort to violence.

“Protracted investigations over two years gathered irrefutable evidence to put to before the CPS, resulting in guilty pleas.

“The lengthy sentence should be a warning to others considering committing robbery or burglary.

“We always fully investigate such incidents and those who think it is acceptable to commit these offences should be left in no doubt that we will do everything we can to take them off our streets.”