Shahid Mohammed (37) formerly of Huddersfield has today (07/08) been sentenced to life imprisonment, serving a minimum of 23 years.

It follows his conviction yesterday for the murders of three generations of the same family after a house fire in Birkby, Huddersfield in 2002.

Statement from the Chishti family:

"We are naturally pleased that the man who ignored police and court bail and somehow left the country has finally been brought to justice after 17 heart-breaking years. He has now been convicted of killing much beloved members of our family on 12th May 2002 in a most despicable crime.

"Like his other henchmen, this is a person with no moral values or conscience and whose behaviour on that fateful night and since was insensitive, wicked and downright criminal.

"In a chillingly cold, calculated and planned fashion, he and friends took the lives of 8 loved, cherished and totally innocent members of our family, including the most despicable of all crimes, the killing of 5 children.  It should never be forgotten that the youngest of all, Najeeba, was a baby of barely 6-months-of-age.

"In May 2017, our beloved father also died, seemingly through ill health, but undoubtedly, through the years of utter heart-break, pain and suffering caused by this heinous of crimes. In reality, therefore, this mob killed not 8, but 9 members of our family. And since they did so, neither this man or the others and indeed their family members, have shown any sign of sadness, remorse or an ounce of basic human compassion to a family stricken with grief.

"This particular coward even took to fleeing the country in an attempt at evading justice. Well justice eventually caught up with him. He and his friends are a disgrace to humanity, let alone our religion and our community.  For these reasons, we have nothing but contempt for him and each one of gang.

"Now that this individual has been convicted of murder and given his cowardly attempt at trying to evade justice for well over a decade, if there is going to be any meaningful justice for our long suffering family, we believe that the sentence of life imprisonment that this carries should mean exactly that.

"Of course, it goes without saying, that no sentence from the courts can, or ever will, do true justice to the evil of these people’s crimes.

"On a more positive note, we would like to thank all the witnesses who attended this trial and evidence against this killer, especially after all these years. They have shown bravely and courage in facing him.  We would also like to thank all court staff in looking after us during these difficult weeks.  They have shown compassion and understanding in a way that shames this evil man who has none.

"We would also like to put on record our heartfelt praise and sincere thanks to the officers of West Yorkshire Police and the thoroughly dedicated members of the enquiry team and family liaison unit, for the way in which they have approached the unenviable task of investigating this wicked crime. Their tenacity in tracking down and bringing back this man from Pakistan and their utter dedication in helping to bring him to face justice 17 years after the terrible events of 12th May 2002. Mr Wallen, I would like to say a huge thank-you to you and your officers for being an absolute credit to yourselves and your profession. You have all gone well beyond the call of duty by not just dealing with this most horrendous of crimes in a professional and yet sensitive manner, I speak for us all in saying that we have a life-long connection with you and are proud to call you our dear friends.  Thank-you from the bottom of our hearts.

"Finally, now that the trial is over, the family would respectfully request that our privacy should be respected."

A man has been convicted for the murders of three generations of the same family after a house fire in Birkby, Huddersfield in 2002.

Following a five-week trial at Leeds Crown Court, Mohammed was today found guilty by a jury of eight counts of murder of five children and three adults, and of one count of conspiracy to commit arson.

Mohammed was extradited back to the United Kingdom in October last year, by officers from West Yorkshire Police’s Homicide and Major Enquiry Team, with the support of the National Crime Agency, the British High Commission in Islamabad, and the Crown Prosecution Service and local authorities in Pakistan.

He had been held in prison in Pakistan since he was located and arrested in Rawalpindi on 22 January 2015 following a joint operation between West Yorkshire Police, the NCA and Pakistani authorities. 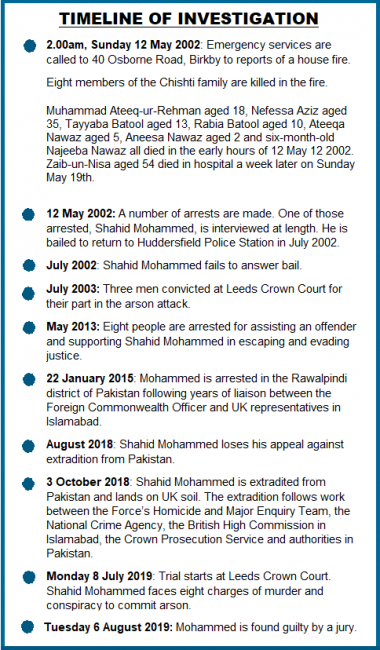 “Today marks an important milestone in this case; I am pleased to say that we have finally secured justice for the Chishti family and Shahid Mohammed has been convicted for his involvement in this horrific incident, which claimed the lives of eight innocent people, 5 of who were children.

“This incident remains the biggest single event of multiple murders that West Yorkshire Police has investigated. It has been an extensive and protracted enquiry with a large team of detectives tirelessly working to secure justice for the family. At the end of last year, we were successfully able to extradite Mohammed from Pakistan with the assistance and support and several agencies both here in the UK and abroad.

“Since 2002, the Chishti family has shown nothing but dignity throughout this unimaginable tragedy for their family. I would like to express my greatest condolences and gratitude to them for all these years and I wholeheartedly welcome the verdict handed to Mohammed after he attempted to evade justice for so many years.”

“This was a tragic incident which had a devastating impact on the family and the wider community, as well as being distressing for the firefighters and investigators who dealt with the aftermath.

“In this case the speed and ferocity of the fire gave little chance of escape due to accelerants being used.  We condemn deliberate fire setting in any circumstances however the details of this case are particularly abhorrent.”