Aspiring police officers in Kirklees will be able to get first-hand experience of life in the blue line through two recruitment events this week.

The Huddersfield Neighbourhood Policing Team is to hold recruitment drives at supermarkets in Huddersfield this Thursday and Saturday to promote West Yorkshire Police’s ongoing recruitment of Degree Apprenticeship Officers. 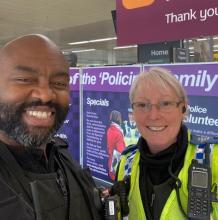 The starting salary for trainee officers is £20,879, which will increase to a minimum of £26,371 after the three-year training has been completed.

New apprentices will be educated and mentored by experienced officers at West Yorkshire Police’s Learning and Development Centre at Carr Gate, Wakefield, alongside studying for a degree with Leeds Trinity University.

Huddersfield Officers held the first of their three events to promote a career in policing at the Sainsbury’s store in Shorehead on Monday with the next two events at :

The force is particularly welcoming applications from those from a Black, Asian and Minority Ethnic background as we work to improve our diversity in force and become more representative of West Yorkshire’s communities.

Huddersfield NPT Inspector Graham Dyson said: “The new Police Constable Degree Apprentices will be the driving force for West Yorkshire Police in the future and I want to ensure that we have representatives applying from across all our communities.

“The apprenticeship is an exciting opportunity for recruits to develop their skills in a variety of areas including working within Neighbourhoods, CID and Roads Policing.

“This will then ensure that the officers are both skilled regarding law and processes but also in relation to engaging with public through classroom and ‘on the job’ training.”

PCSO Dawn Su of the Huddersfield NPT, who organised the Sainsbury’s event, said: “PC Terry Harriott and I had a great day talking to prospective officers and had a number of enquiries and a lot of interest from people.

“The management at Sainsbury’s were extremely supportive of the event.”

To find out more about becoming a Police Officer see the force website at https://www.westyorkshire.police.uk/jobs-volunteer/police-officers/police-officers