Police in Huddersfield are urging residents to share footage of dangerous driving as part of an ongoing operation targeting anti-social motorists.

The Huddersfield Neighbourhood Policing Team have said they will continue operations in hotspots in the town over the coming weeks in response to concern from residents about speeding drivers. 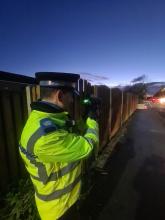 Most recently officers have been working the Lindley area and dealing with motorists for various matters to make the roads safer.

Officers have undertaken speed gun deployments and also patrolled with marked police vehicles in order to deter offending and pull over drivers seen behaving in an anti-social manner.

The recent deployments follow a number of the road safety initiatives in the Huddersfield area during autumn and winter including vehicle safety checks in the Bradley and Fixby areas.

Inspector Graham Dyson of the Huddersfield NPT, said, “We have a number of locations across the area where we receive numerous reports of loud cars, speeding and general ASB driving. 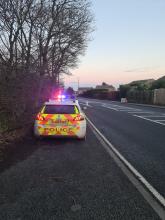 “We are therefore responding to this information as part of our ‘You said – We Did’ deployments.

“Making the roads safer is always a key priority and we will continue to target those areas where people believe they can drive outside of the law.

“I would also encourage anyone who captures any incident of ASB driving on Dash Cam to submit this to Police via our website so that it can be investigated.

Footage of incidents can be uploaded to Police at https://www.westyorkshire.police.uk/SaferRoadsSubmissions

West Yorkshire Police can be contacted via 999 for a crime in progress or 101 or 101livechat for other incidents or information about offending.