Police in Huddersfield have kept up an ongoing ‘drive’ to improve road safety in the town with a recent operation. 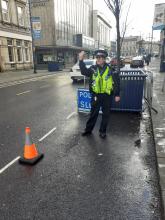 Officers from the Huddersfield Town Centre Team stopped and checked over vehicles on John William Street on New Year’s Eve for safety and drink/drugs drivers.

Advice was also given to a man who had breached Covid 19 legislation by travelling from Liverpool to Huddersfield with no justifiable reason for leaving his area.

The operation followed recent initiatives by the Huddersfield Neighbourhood Policing Team to clamp down on dangerous and anti-social driving.

Most recently officers have been working the Lindley area and dealing with motorists for various matters to make the roads safer.

Officers have undertaken speed gun deployments and also patrolled with marked police vehicles in order to deter offending and pull over drivers seen behaving in an anti-social manner. 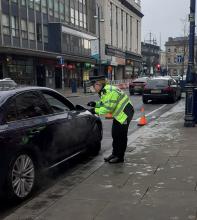 “It was pleasing to see the majority of drivers we stopped were law abiding in terms of both the condition of their cars and in complying with drink and drug drive legislation.

“We would also encourage anyone who captures any incident of dangerous or anti social driving on Dash Cam to submit this to Police via our website so that it can be investigated.”

Footage of incidents can be uploaded to Police at  www.westyorkshire.police.uk/SaferRoadsSubmissions