Rogue riders in Wakefield have been warned they could soon be caught out by a police eye in the sky after officer’s deployed drones to detect illegal off road bikers. 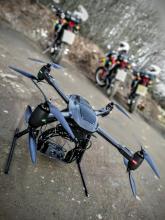 Wakefield District bike cops deployed drones in a test operation at Horbury Lagoon last week, in what was the first such use of Unmanned Aerial Vehicle (UAV) technology to support off road bike policing in West Yorkshire.

Officers West Yorkshire Police’s UAV Operations team piloted a drone over the lagoon on the day to provide bird’s eye support for patrolling officers from the District’s Matrix off road team.

Tests showed that the drone was able to give a crystal clear picture of the whole lagoon area, providing the drone operator with real time intelligence which could be used to direct police off road riders on the ground.

More drone flights in other ‘hotspot’ areas for anti-social riding in Wakefield District are now planned in the coming weeks.

The Matrix team itself is now operating seven days a week after its expansion in late 2018 and is busier than it has ever been. 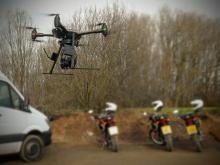 In the last week alone the team seized an off road bike seen being used illegally in Upton, arrested a man in Airedale for dangerous riding on a stolen motorbike and secured a £200 fine in court for a male seen riding illegally.

During 2018 the team seized 96 off road bikes and either charged or reported 43 people for summons.

It works closely with PCSOs in NPTs to target patrols based on their local intelligence, and has been receiving increasing amounts of information from residents through social media and email.

PC Finley of the Operation Matrix Team, said: “The use of drones will really assist us on operations and we want to thank our colleagues from UAV Operations for their help in making this project a reality.

“In tests on Horbury Lagoon, a drone covering the southern area was able to give the operator a perfect view of the whole lagoon itself due to its height and camera kit, illustrating their effectiveness.

“If any illegal riders had been present and operating out of view of our Matrix team, the drone pilot would have spotted them and been able to guide us straight to where the problem was.”

Chief Inspector Alan Rhees-Cooper of Wakefield District Police, said: “The Matrix Team has made a real success story for Wakefield District since its introduction in 2015 and we are delighted to have had the opportunity to use one of the Force’s UAVs to support our off road officers

“The UAVs provide us with a significant new ability to track suspects further, and more quickly direct our riders to trouble spots, really boosting our riders ‘real time’ intelligence of where suspects are heading as they approach areas where anti-social riders are operating.”

He added: “We remain focussed on combatting illegal off road riding, and continue to ask people to get in touch and give intelligence about anti-social riders operating in their communities to their local neighbourhood policing teams.  We are acting to catch these people and are getting them off the road and putting them before the courts.”

Appeal: Robbery, Netherthong, Holmfirth
Images Appeal Over Leeds Street Robberies Series.
One Month On In The Search For Mateusz Lugowski
Six Men Jailed For More Than 55 Years For Sexually Abusing Girls In Huddersfield