A Keighley man has been jailed for 21 years for rape and indecent assault of a child. 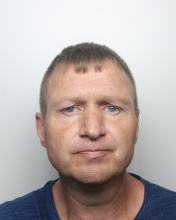 Brian Willoughby, 51, of North Dean Road, Keighley has been found guilty of five offences including rape and several indecent assaults of one female victim.

In 2005, the victim disclosed that she had been sexually abused as a child and then in 2014, she came forward to speak to the police and report the offences, as she felt ready to do so.

Willoughby was subsequently arrested and charged with multiple offences.

Yesterday (3 December) Willoughby was sentenced at Bradford Crown Court to 21 years in prison and has been given a Sexual Harm Prevention Order for life.

Detective Constable Donna Hector, of Bradford Safeguarding Unit, said: “The sentence handed down to Willoughby reflects the horrendous crimes and trauma he inflicted on his victim.

“I would like to praise the incredible courage and bravery of the victim. She is truly remarkable and has not only endured abuse throughout her childhood, but was forced to endure a gruelling court case where she had to give evidence and relive her trauma.

“We have supported her throughout the process and I truly hope she is now able to get some closure from these incidents and move forward.

“I would encourage anyone who has suffered any sort of abuse to come forward and speak to the police. You will be listened to and be given the help and support you need. We have specially trained officers who will work tirelessly to bring any perpetrators to justice.”