A well-respected Superintendent in Kirklees is hanging up her boots and retiring from West Yorkshire Police after a career spanning over 30 years.

Superintendent Marianne Huison is leaving the Force today after an outstanding career at West Yorkshire Police where she has risen up the ranks and ended her stint at Superintendent in Kirklees District for Crime and Safeguarding. 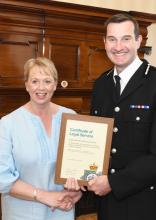 Marianne joined West Yorkshire Police in 1989 and has served a variety of roles throughout the Force including uniform patrol, proactive teams, child protection, domestic violence, working in major incident rooms and staff officer for the Assistant Chief Constable.

In 1992, she specialized as a child abuse investigator and began working at the Wakefield Domestic Violence and Child Abuse Unit.

A few years later, Marianne was promoted to Sergeant and was working from Millgarth police station in Leeds. At this time, she was the only female officer above PC rank in the District.

In 1997, Marianne was working part time as a patrol Sergeant in Leeds and looking after her first child. She went onto working in the Safeguarding Unit in Kirklees and then began studying for her Inspector’s boards. In 2006, she was promoted to Detective Inspector and appointed as the Force Strategic Coordinator focusing on Domestic Abuse, Forced Marriage and Harassment.

Marianne rose through the ranks to Detective Chief Inspector in November 2008 and was appointed Head of Child and Public Protection having both a strategic and operational responsibility for rape investigations, child protection, public protection, CSE, domestic abuse, forced marriage and missing persons.

Marianne worked in Bradford for a year as Chief Inspector for Partnerships and was responsible for Safeguarding but also oversaw Integrated Offender Management, ASB teams, Crime Reduction and Community Cohesion.

From 2012 – 2016, she went back to Kirklees as Chief Inspector for Operations managing several departments including the Control Room, Intelligence, Custody and Response Officers. She also had an integral role in driving the wellbeing agenda in Kirklees to ensure improved working conditions for officers.

In October 2016, Marianne was promoted to Superintendent and worked at Force Headquarters to lead a Force Review of Neighbourhood Policing.

Marianne returned to her beloved home District of Kirklees in 2017 where she has been ever since and has been responsible for overseeing Crime and Safeguarding.

During her service, she has been nominated for many awards such as The Dennis Hoban Trophy for Crime Investigation in 1992 whilst a Detective Constable at the then Domestic Violence and Child Protection Unit, the Adams McGill award for the Protection of Vulnerable Victims in 2003, the National Criminal Justice Award for Partnership of the Year; Best Example of joint working across the CJS in 2007 and the Excel Award for Problem Solving with Partners, 2007.

She said: "I am immensely proud of my career at West Yorkshire Police and I have had the privilege to work with some of the most fantastic and committed people and also had the opportunity to have helped some really courageous victims of crime.

“I will wholeheartedly miss the world of policing but I am looking forward to the future and what’s next.”