Man Jailed for 16 Years After Murdering His Brother

A Dewsbury man has been jailed for 16 years after being found guilty of murdering his brother. 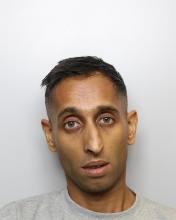 His brother, Naseer Yusef Mahetar was struck with a bat and also received significant stab injuries in an incident at an address in Town Street, in Batley. He died as a result of his injuries.

Today (27 February) was sentenced to 16 years in prison.

Detective Inspector Emma Winfield, of the Homicide and Major Enquiry Team, said: “We welcome the sentence which has been passed down to Ibrahim Mahetar today. He inflicted a sustained and violent attack on his brother; causing him fatal injuries.

“I would like to pay tribute to Naseer’s family who have been left utterly devastated by his death. They have had the added trauma of reliving the events through the court process which has been extremely difficult for them.”

“As a family we continue to grieve the loss of Naseer, who was a loving son, husband, daddy, brother and friend to many.

“Naseer was a kind, caring hard working family man who doted on his family.  His young daughters (aged two and eight) miss their Daddy terribly every day. There is not a day that passes without us thinking of him and the happier times we had together

“We respect and appreciate the findings of the Court. And are grateful to all those involved in the case and thank them for their hard work and support in bringing Naseer’s case to its conclusion.

“Despite the outcome of the trial, Ibrahim Mahetar is responsible for dramatically changing our lives forever, nothing can ever compensate us or fill the void of our loss.  Our sentence is a life sentence without Naseer.”