A Leeds man has been sentenced to six years in prison after admitting his part in a high value cash in transit raid on a store in Huddersfield. 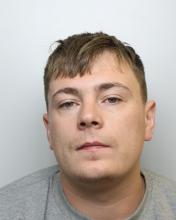 Ben Dyer (27) from Osmondthorpe was sentenced at Leeds Crown Court yesterday (June 4) after pleading guilty to the robbery at a Co-op store on Park Road West, Huddersfield on May 5.

The court heard Dyer, who pleaded guilty to robbery and aggravated vehicle taking, was one of three men who broke into the store while Co-Op staff and cash in transit (CIT) officers were present.

Kirklees District CID are continuing enquiries into the raid and have so far recovered a substantial amount of the stolen cash.

PC Callum Watson of Kirklees CID, said: “We welcome the sentencing of Dyer for his part in what was a high value theft on a local business.

“Although no-one was hurt in the raid, this would clearly have been a very distressing incident for staff and CIT officers inside the shop.

“We are continuing to investigate this very serious robbery and are pursuing lines of enquiry.”