A Batley man has been jailed for life for causing the death of a man after he viciously assaulted him with a hammer. 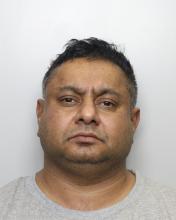 The incident happened on 3 January this year after a man was found with a serious head injury at Highfield Court in Batley.

The victim, 46-year-old Firoz Ibrahim Pargarkar, was rushed to hospital, but sadly died as a result of his injuries on 24 February.

Abdul Kapde approached police officers on the day of the incident admitting what he had done. Mr Pargarkar had been repeatedly struck with a hammer in his home.

He was found guilty by a jury following a five-day trial at Leeds Crown Court and has now been sentenced today (20 August) for life with a minimum term of 14 years in prison.

Detective Superintendent Nicola Bryar, of the Homicide and Major Enquiry team, said: “This was a violent and sustained attack on Mr Pargarkar and the injuries he sustained were catastrophic.

“The defendant and victim were friends of many years and their disagreement stemmed from a £20,000 debt which was owed to Kapde for the sale of his house.

“We welcome the sentence which has been handed to Kapde and hope that this brings some closure and comfort to the family and loved ones of Mr Pargarkar.”