A man who caused the death of an Ilkley pensioner by driving dangerously has been jailed for more than three years. 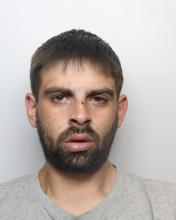 guilty at an earlier hearing. He was jailed for 3 years 4 months and given a driving ban for 3 years and 8 months.

Horsfall, of no fixed abode, was the driver of a silver Vauxhall Astra which was in collision with a Honda Jazz in Common Road, Bradford, on 24 February last year.

The passenger in the Jazz was 68-year-old Jane Floweth. She suffered serious injuries and was taken to hospital, where she sadly died a few days later.

Horsfall fled the scene and was arrested a few days later after enquiries suggested that he was driving the vehicle, which just minutes before the collision had overtaken traffic at speed as it travelled along the A641 Huddersfield Road.

“We would like to express our sympathies to Jane’s family, who suffered a sudden and tragic loss because of Horsfall’s reckless actions.

“This should serve as a reminder to us all of what can happen when a vehicle is driven unsafely and without regard for other road users.”