Over 100 Cars Stopped And Check In Huddersfield Road Safety Drive

More than 100 cars have been given a winter once over in Huddersfield as part of a police operation to try and make roads safer.

Officers from the Huddersfield NPT stopped and checked the tyres of a variety of differing vehicles on Sunday (October 18) as part of National Tyre Safety Week. 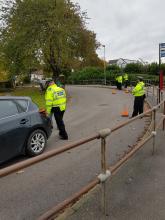 The team also checked drivers they stopped for drink and drug offences and deployed speed cameras as part of the operation which is part of a number of planned initiatives to try and boost road safety in the Huddersfield area ahead of winter weather setting in.

Sunday’s operation focussed on the Bradley and Fixby area but follow up activity is set to take part in other parts of the town.

Around 20 vehicles were found to have partly worn tyres and drivers were given advisory warnings to ensure they replaced their tyres.

No drink or drug driving offences were detected.

PCSO Laura Brennan of the Huddersfield NPT, who organised the day of action said, “All motorist’s that we spoke to were extremely positive about the checks we were conducting, and really pleased that we were being proactive to ensure our roads are safe for all. 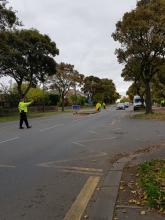 Inspector Graham Dyson of the Huddersfield NPT, added: “Road safety is a key issue for my officers, and I was really pleased to see that the checks we carried out were received with such positivity.

“It was also fantastic to see that apart from some drivers being given advice to renew their tyres that no enforcement was required and that the motorists were keen to ensure their vehicles were legal and roadworthy.

“I was also pleased to see that no drink or drug dirving offences were detected in the more than 100 motorists who we stopped and spoke with.

He added: “Further events are planned across the area ahead of and during autumn and winter to ensure drivers are using their vehicles in a safe and responsible manner.”