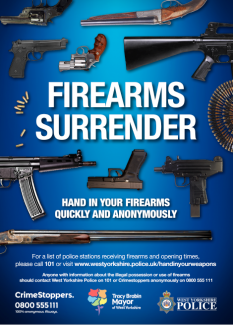 West Yorkshire Police is appealing to people to help make our communities safer by handing in their unwanted guns and ammunition.

Today (Thursday,12 May) marks the launch of the firearms surrender campaign lasting until Sunday 29 May – and giving people 18 days to hand weapons in at any one of six police stations across the county without fear of being prosecuted for possessing them.

The campaign is part of a national firearms surrender aimed at removing illegal firearms from communities across England and Wales.
And the message is clear - that just one gun handed in reduces the danger of that firearm falling into criminal hands.

People have a little over two weeks to hand in the firearms at a police station without any fear of prosecution for possessing it. And they can do so without leaving their contact details.

That resulted in 90 weapons being handed in. A total of 31 ‘live’ firearms including 21 handguns, eight shotguns, a taser and a rifle were surrendered. Large quantities of ammunition, including 1,500 shotgun cartridges were also handed over.

Temporary Assistant Chief Constable Pat Twiggs said: “We know that many people will have firearms kept illegally in their homes. It could be that they don’t understand that being in possession of such a weapon is illegal – or perhaps recent changes in the law may have rendered what was a previously legal firearm, an illegal one.”

“It could be that these firearms are gathering dust in the attic, garage or garden shed.”

“Or it could be that you know a loved-one who, for whatever reason, has an illegally-held gun in the house.”

“These are the reasons why it’s important that we have this firearms and ammunition surrender now – as it allows people to hand in these weapons into a secure environment where they can be disposed of safely.”

“People don’t have to leave their details with our officers if they don’t want to. And they won’t be prosecuted for possessing a firearm that’s handed in to us during this 18-day period.”

“It is important that in the fight against gun crime we look to get as many illegal guns as we can off the streets of West Yorkshire.”

“If just one weapon is taken off the streets, that reduces the chances of it being used in criminality.”

“Tackling serious violent crime is one of the key priorities of the Mayor’s first Police and Crime Plan and I support every intervention and approach that might assist in combatting these issues within our communities.

“We have all seen the harm that weapons can do to our communities and the dreadful consequences for the individuals involved in their possession or use.

“The ‘Safety in Music’ project, funded by the VRU, is a great example of how young people are being educated as to the dangers and becoming positive ambassadors among their peers. Their recently released track ‘Let the Gun Drop’, really demonstrates this.

“Between April and the end of December 2021, 5816 young people were supported across 41 interventions funded by the VRU and that figure continue to rise.

“This sustained partnership approach, coupled with dedicated campaigns such as this latest firearms surrender are helping to ensure our county remains a safe place to live and work.”

If you have any concerns about the safety of transporting a firearm you are planning to surrender, please call 101 instead so that arrangements can be made for it to be surrendered in a safe manner.

Firearms and ammunition can be handed in at the following six locations in West Yorkshire: 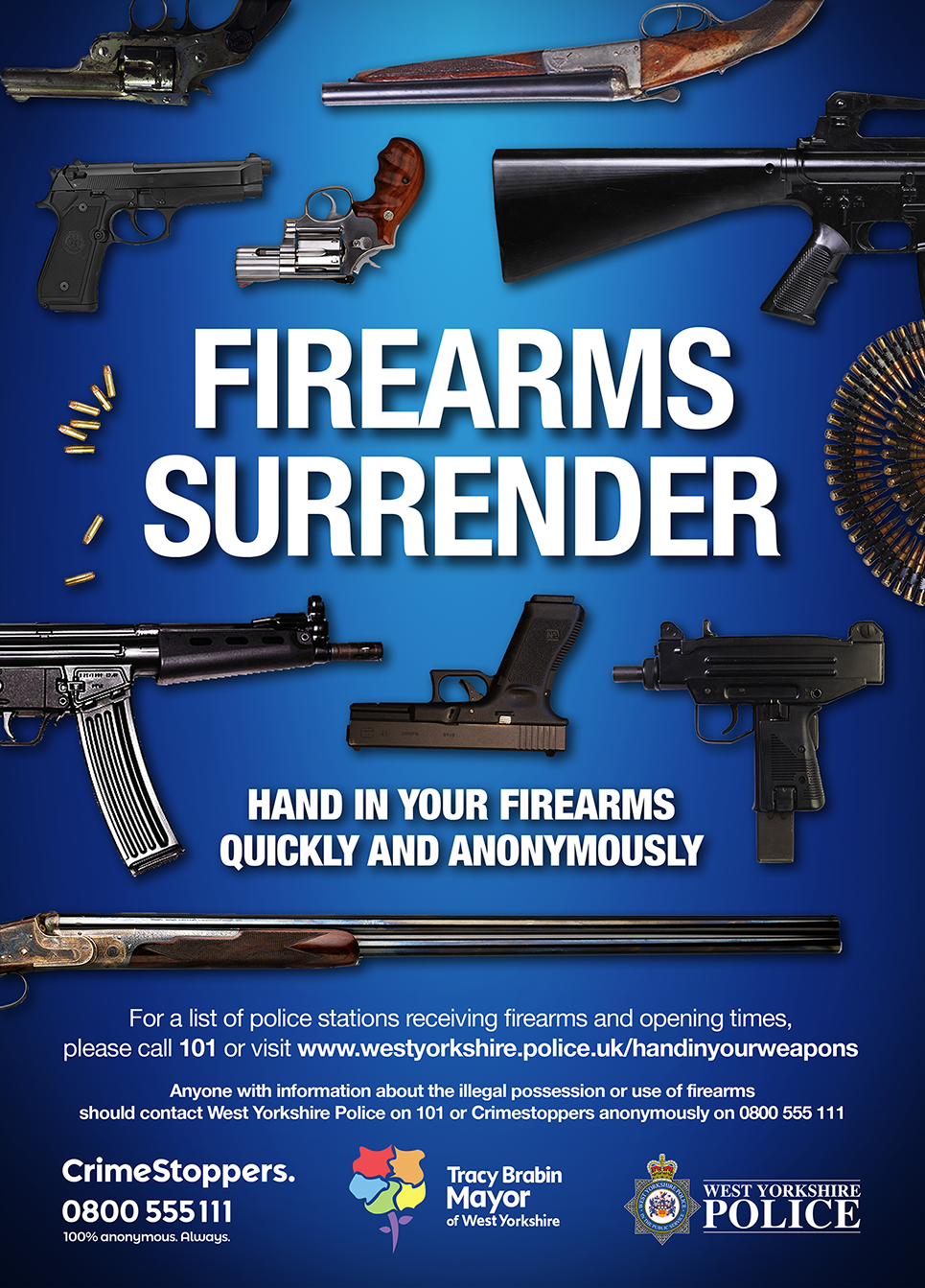