Police in Bradford are warning residents of the potential dangers after a large quantity of cannabis-laced sweets which have been seized. 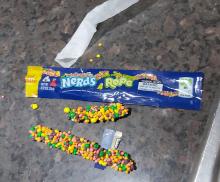 Today (9 July), a series of search warrants were conducted across Bradford, in relation to cannabis production and supply, resulting in a significant amount of drugs and cash being recovered.

Amongst the items which were seized, was a large amount of sweets which had been infused with cannabis, as well as professional packaging machines, cooking equipment, large quantity of cash and cannabis plants.

Bradford South NPT officers were supported by officers from Programme Precision and Operational Support and six properties were visited.

A total of seven people have been arrested in connection with today’s activity and enquiries remain ongoing.

Police are urging parents and teenagers to be vigilant and if they see anything specific to contact the police.

Inspector Kerry Feathers of Bradford South NPT, said: “The intelligence led investigation we conducted today ultimately led us to recovering a significant amount of drugs.  Perhaps even more concerning is the recovery of equipment used to produce sweets laced with drugs, which, as with all illegal drugs are potentially dangerous, particularly if taken by children.

“The end product of the production operation we discovered and dismantled today is highly professional and they would easily be mistaken for normal sweets.

“We want to warn teenagers and parents of the dangers of taking laced ‘Nerd Rope’. It may look like a sweet but taking it could be dangerous and is also illegal.

“We would like to reassure residents that we take all offences involving drugs and production of them extremely seriously and through the proactive work carried out today, a large amount of drugs has been taken off the streets of Bradford.”

Anyone who has any information or has seen any other of these drugs in circulation are urged to contact the Bradford District Police via 101 or alternatively through the 101 LiveChat facility on the West Yorkshire Police website.