More than three quarters of a million pounds worth of cannabis has been seized from a West Yorkshire village following a series of police raids. 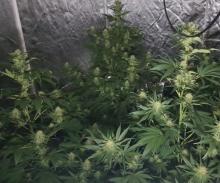 Wakefield District Police is continuing to investigate after officers from the Wakefield South East NPT and partners seized more than 700 cannabis plants in a series of operations in the village of Upton.

Officers conducted nine raids on cannabis farms in November as part of an ongoing investigation with Wakefield CID and West Yorkshire Police’s Programme Precision into drugs supply in the District.

It is believed the street value of the recovered plants, when cultivated, would be in excess of £750,000.

Three hundred and ninety seven plants were seized from a property on Clayton Avenue, while 72 plants were discovered at one property on Smeaton Road and 38 at another on the same road.

Five suspects were arrested as part of the enquiry which also saw weapons recovered from properties including a bladed weapon and suspected pepper spray.

Temporary Inspector David Lockwood of the Wakefield East and South East NPT, said: “This has been a large scale operation in which neighbourhood policing team officers have worked closely with colleagues from CID and NPAS to target ongoing drugs crime within a small local community.

“A substantial amount of high value cannabis has been taken as a result of the raids, and we have no doubt the scale of this operation will send a very clear message to those involved in crime that we have the capability to act quickly and at scale to dismantle drugs factories wherever they appear.

He added: “Residents should not have to stand for this sort of large scale drugs manufacture and criminal activity ongoing on their streets and communities, and we can promise all intelligence we receive will be investigated.

“I would urge anyone who has information about the supply of drugs of any type of crime in their area to make a report via 101 or online at www.westyorkshire.police.uk/101livechat.

Information can also be reported anonymously to the independent Crimestoppers charity on 0800 555 111.”