Police are appealing for information to locate a Castleford woman who is wanted for failing to attend court. 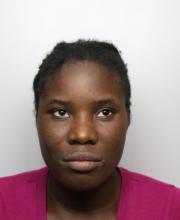 Officers would like to speak to anyone who has information about the whereabouts of Zermen Mendy, 27, from the Castleford area.

She is wanted after failing to attend Leeds Magistrates Court where she was due to appear in connection with a racially aggravated assault.

Police have been carrying out a number of enquiries in and around Castleford to locate her.

She is described as a black woman, 5ft 5ins tall, of medium build, with black, curly hair.

Anyone who has seen Zermen Mendy or who has any information that could assist in tracing her is asked to contact West Yorkshire Police by emailing [email protected] quoting reference number 13210173070.

Information can also be given online at: www.westyorkshire.police.uk/101livechat or anonymously to the independent charity Crimestoppers on 0800 555 111.