Sharp eyed residents are being urged to lock car doors and lock out sneak thieves as part of a continuing drive to combat car crime in Huddersfield.

The Huddersfield Neighbourhood Policing Team is urging residents to continue to be vigilant and also report suspicious behaviour after making more arrests for vehicle break-ins over the weekend and also recovering suspected stolen property.

Officers have said residents have done a fantastic job at being their eyes and ears on streets and advised owners of vehicles to make sure they keep them secure to thwart opportunists.

Police attended in the Fartown area on Sunday night following a report of a man trying car doors, and following enquiries, arrested a 53-year-old man on suspicion of vehicle offences.

The arrest followed the detention and arrest of a 41-year-old Lockwood man in the Oakes area in the early hours of Saturday morning after he was spotted acting suspiciously by a patrol.

A quantity of property suspected as being stolen from vehicles in the Salendine Nook and Mount area was also recovered.

The property included a Bluetooth speaker (pictured) which officers would look to reunite with its rightful owner. 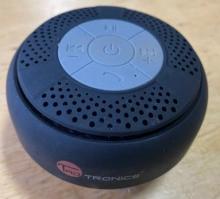 It is believed the speaker may have been taken from the Lindley or Paddock areas and anyone who has had such a device stolen and believes the property is theirs is asked to contact the Huddersfield NPT.

Inspector Graham Dyson of the Huddersfield NPT, said: “Again we have seen how the community and Police working together can ensure that criminals intent on committing crime are coming under increasing pressure.

“Our communities are really pulling together to give us that information to ensure officers are deployed in the right areas.

“Policing cannot be effective without that flow of information, and I applaud everyone who contacts us with either information, or via 999 when appropriate for an ongoing offence.

He added: “However, one thing that has come to light again is that offenders are literally walking down a street and trying car door handles until they find one that is unlocked.

“Please can I therefore just ask everyone to ‘click and check’ their vehicle is locked and secured, and also ensure valuables aren’t left on display.

“Quite clearly criminals are looking for easy opportunities. None of the recent arrests have found any of the offenders carrying items to break into cars, and the evidence is becoming overwhelming that offenders are just targeting insecure vehicles.”

West Yorkshire Police can be contacted via 999 for a crime in progress or 101 or 101livechat for other incidents or information about offending.

Members of the public can pass information anonymously via the independent Crimestoppers charity on 0800 555 111.

The online reporting service can be found at www.westyorkshire.police.uk/101livechat