Residents and revellers in Huddersfield are seeing more police on their evening streets as part of a continuing drive to make the town safer.

The Huddersfield Neighbourhood Policing Team started the first of a series of enhanced foot patrols in Huddersfield town centre last Friday and Saturday, following on from a wave of recent initiatives to cut anti-social behaviour and boost visible policing across Huddersfield during the day and evening.

Initial feedback from the patrols was that the extra evening police presence resulted in a significant reduction anti-social behaviour and violent crime linked to the night time economy.

Over the last six weeks the NPT has worked with partners from the force’s Operations Support Unit and also Safer Kirklees to increase visible policing and provide reassurance for residents and businesses.

Support was provided by specialist officers from the force’s Operations Support Unit for the patrols, as well as by the force mounted section. 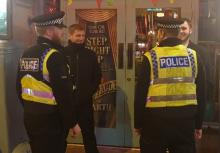 Bespoke operations were also run during Freshers week, including the deployment of knife arches and drugs dogs.

These proved useful in both deterring violent offending and also potential drug dealing.

Inspector Graham Dyson of the Huddersfield NPT, said:  “We have been working hard with partners across the force and Safer Kirklees to boost visible policing in Huddersfield over the last few weeks.

“Although these operations have been extremely useful, we are still acutely aware that offences will still happen and we are therefore constantly reviewing our patrols and tactics to ensure that officers can, as far as humanly possible, be in the right place at the right time.”

“After meeting with a variety or licensees we have further reviewed our deployments and have enhanced our patrols in the town centre on Friday and Saturday nights.”

“These patrols are foot patrols allowing officers to get out on the streets, engage with groups of people enjoying the town centre, and ensure that any persons who look to cause trouble, or may have had one or two too many are identified early and either given assistance or dealt with to ensure incidents don’t escalate later in the night.”

“Our Policing is always information led, and I would encourage anyone with information about ASB and any crime within Huddersfield to contact Police via 101 or on-line, or provide information anonymously via the independent Crimestoppers charity on 0800 555 111.”