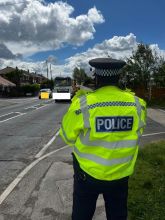 A multi-agency road safety operation was carried out in Batley and Mirfield yesterday (Tuesday, 24 May) with one vehicle seized which had not been taxed for two years.

Officers from the Kirklees IOM Catch and Control Team, Roads Policing Unit officers and PCSOS from the  Neighbourhood Policing Team were involved in the operation.

The operation started on Bradford Road, Batley where Vehicle Defect Rectification Scheme (VDRS) notices were issued to two motorists for illegal number plates, three Traffic Offence Reports (TOR) were made in relation to vehicles with bald tyres, one TOR was issued for an expired MOT and one vehicle was seized due to no road tax.

The team then moved on to Huddersfield Road, Mirfield, where one VDR notice was issued for illegal number plates and one TOR was issued for speeding. 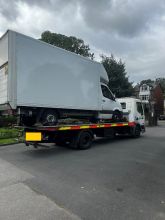 Kirklees Taxi Licensing were also involved in the operation and stopped and checked four taxis in Batley and six taxis in Mirfield.

The Kirklees Catch and Control Team was formed as part of a shake-up of offender management in Kirklees.

It operates to hunt down known offenders who refuse to engage with the terms of their bail and assist NPT’s team to manage priority crime and issues of concern in their areas.

Catch and Control Team officers make use of investigative police work, high tech tools such as ANPR, and impactful high visibility policing to sniff out offenders and also provide reassurance in communities. 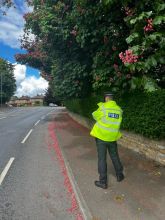 PC Chris Linley, from the Kirklees Catch and Control Team, said: “This operation was conducted in response to concerns raised by local residents. We had members of the public in both Batley and Mirfield stopping to tell us how pleased they were to see us and several thumbs up from drivers too!

“Driving a vehicle that is not roadworthy or adequately insured puts yourself and other road users at risk. We also continue to target the fatal four – speeding, using a mobile phone whilst driving, not wearing a seatbelt and drink/drug driving – and have taken action against motorists for these offences during this operation.”