Suspected crack cocaine has been seized from the streets of Huddersfield as part of a day of action to combat drug use and dealing.

The Huddersfield Neighbourhood Policing Team has urged residents to keep contacting them with information after launching an intelligence led operation to target street dealing in the Springwood area. 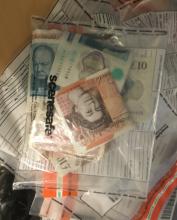 Plain clothes and uniformed officers patrolled extensively in Springwood on  Wednesday (11 /12) in areas identified as hotspots for anti-social behaviour and dealing by residents.

During the operation NPT officers stopped and spoke with a number of persons and also stopped vehicles.

Officers located and seized six wraps of suspected crack as well as cocaine and cash from a car, and arrested a male inside on suspicion of Possession With Intent To Supply Class A drugs

The 26-year-old Huddersfield man was interviewed and released under investigation.

Inspector Graham Dyson of the Huddersfield Neighbourhood Policing Team, said: “This operation was commenced due to information from within the community and residents’ concerns about drugs and drug dealing, and the related anti-social behaviour they were bringing to the area.

“Information from the public is vital in helping us build a picture of where offending is taking place and to target our resources in the right places at the right times.

“We fully recognise the misery drug dealing and related anti-social behaviour cause residents and will continue to act on the information they provide.”

He added: “I would urge anyone who has concerns about drugs or any other crime and ASB in Huddersfield to contact the NPT via 101 or to report online at www.westyorkshire.police/101livechat

“Information can also be reported in complete anonymity to the independent Crimestoppers charity on 0800 555 111.”