He fought fires, drove ambulances and patrolled his streets as a part time police officer but now, after 30 busy blue light years, a Hemsworth man is to take a breather from putting the three into three nines.

Since 1979 he has worked as a part time ambulance driver, a full time divisional officer, an assistant fire officer in South Kirkby Colliery, a retained firefighter in Hemsworth and finally a special constable patrolling Hemsworth.

“I suppose with firefighting role in the mines it was been over 30 years in police, fire and ambulance services, and there is one thing I really can say,” he said.  “There really is no such thing as a part time police office, firefighter, ambulance personnel.  You would never come across an incident of any kind and say am not on duty, not my problem.  You’re in public service and helping people is what you do.”

Roy left school at 15 in 1979 and had wanted to be a firefighter but, as he was under 18, was advised by his uncle to try the St John’s Ambulance Service which at the time, was covering regular ambulance emergency calls.

While volunteering for them, he looked for fulltime work as a miner and found he was in luck on a visit to his local pit.

He said: “My Dad who also happens to be my hero was a miner and ex mines rescue man and got me an interview at South Kirkby colliery.  While I was walking down the pit lane for the interview I passed a small building on the left with the words FIRE STATION on the front.

“As you can imagine I ran the rest of the way to the training office for my interview, which was thanks to my Dad a success.

“So there I was training with the colliery fire team and working part- time with the ambulance in the evenings and at weekends.”

Over the next few years Roy became an assistant fire officer at the colliery and a divisional officer in the ambulance service, attending blue light call outs.

After the closure of the South Kirkby Colliery he applied for and joined the fire service as a retained firefighter based at Hemsworth,

While in the fire service he became a leading firefighter and attended incidents great and small.

“It could be anything from a small grass fire to a large factory blaze, road crashes and even the odd cat stuck up a tree, some incidents really quite funny and some heart breaking, but that’s the nature of it, he said.

A break of a few years followed during which he worked for Wakefield Council, before being encouraged to think about becoming a special constable by lifelong friend Shaun Rhodes, a West Yorkshire Police Inspector.

Speaking of his time as a special constable in Hemsworth, he said: “So there I was on my first day on duty not knowing anyone, but I needn't have worried as I was made welcome and have been made welcome ever since.

“There are too many names to mention who have been there for me for everything from a question on our crime system to standing at my side when things get tough.

“When you join West Yorkshire Police you get a second family, that's how I feel.”

Summing up 30 eventful years in the three nines which have seen him carry out every type of duty, and even drive an NYPD squad car through South Kirkby for charity, he added: “I've saved some lives, I've also lost some, but I would like to think that in my own way I've changed some for the good.”

Chief Superintendent Paul Hepworth, District Commander of Wakefield Police, said: “It is with great sadness that we will see Roy leave us and I’m really pleased that he has chosen to end such a lengthy career in the blue light services with us, serving residents in his home town.

“Roy is a really familiar figure on the streets of Hemsworth and I want to thank him for the excellent public service he has provided over so many years.

“He is a wonderful example of the difference one person can make to those around them and I and his other colleagues at Wakefield Police wish him all the best for his future.” 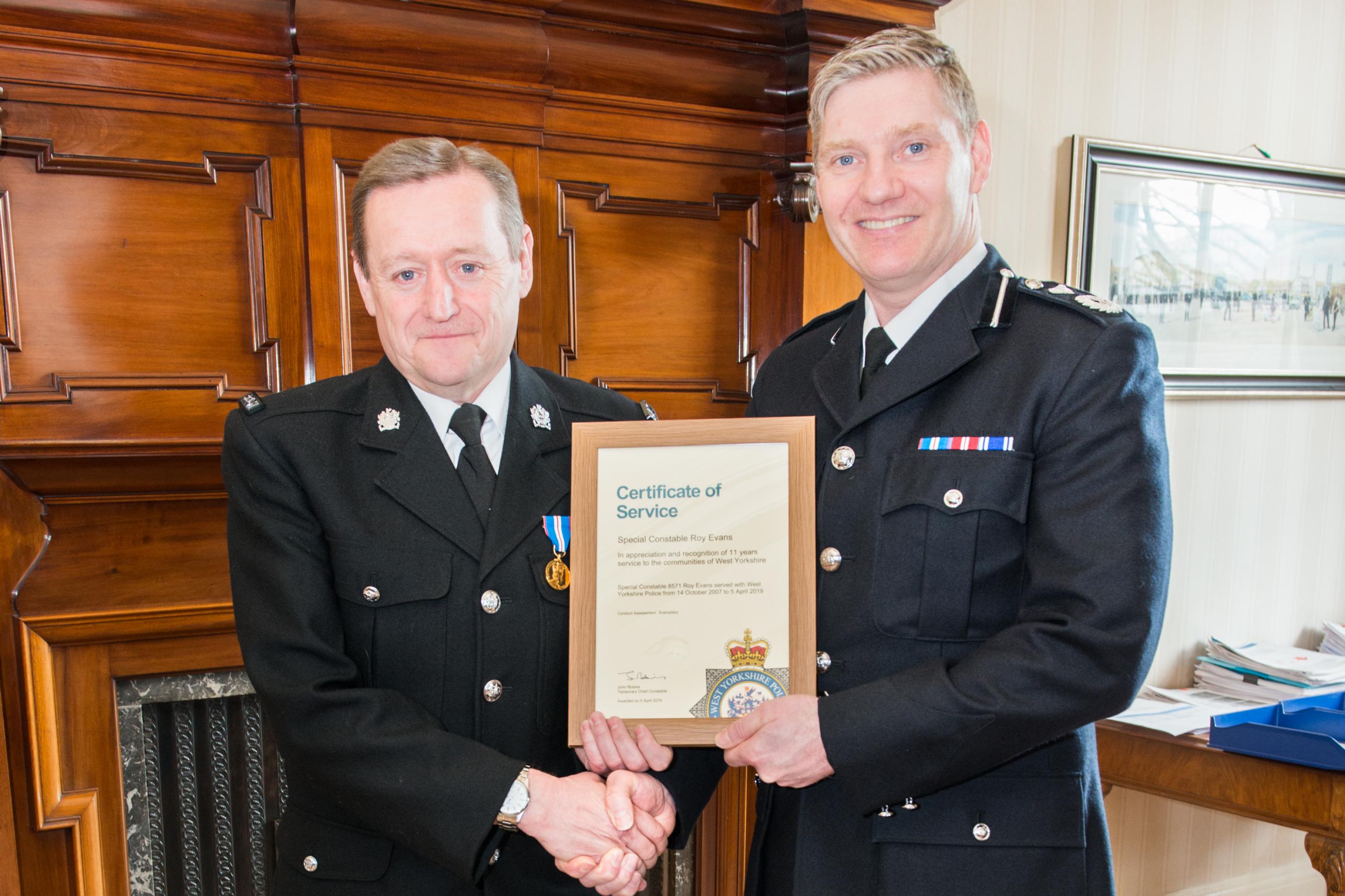