A special ‘Trojan bus’ operation targeting criminal and anti-social behaviour in east Leeds has been run by neighbourhood officers and partner agencies this week.

A group of fifteen officers and PCSOs from the Leeds East Neighbourhood Policing Team worked alongside colleagues from a range of partner agencies, including Leeds Anti-Social Behaviour Team, Safer Leeds, Leedswatch CCTV, Youth Services, BARCA and First Bus, for the initiative which focused on Crossgates, Seacroft, Killingbeck and Whinmoor on Monday night. 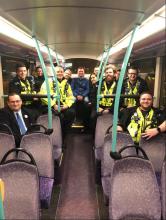 It builds on ongoing work to tackle youth-related issues in the area that has also recently been made the subject of two dispersal orders, which give officers additional powers to restrict the behaviour of those causing problems.

The operation saw the team travelling the area aboard a specially-provided First bus and focusing their attention on known ‘hot spots’.

Throughout the evening they engaged with about 30 youths, with a number of those stopped in the Seacroft area.

Some were suspected of being involved in incidents of stone throwing at a bus and two other passing vehicles.

Details were taken from a total of eighteen youths suspected of being involved in anti-social behaviour and further action is due to be taken in liaison with Leeds Anti-Social Behaviour Team.

Monday night’s operation followed recent incidents involving buses. A youth was arrested on suspicion of possessing an air weapon on a bus in South Parkway on Saturday and for a separate incident involving a BB gun on Friday at Seacroft Shopping Centre. He has been released under investigation. 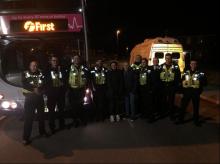 Inspector Mick Preston, who heads the Leeds East Neighbourhood Policing Team, said: “We have been doing a great deal of work alongside our partner agencies to tackle anti-social behaviour involving groups of youths in these areas and this week’s operation has been the latest instalment of that.

“It saw a significant number of youths stopped and spoken to by officers and partner services who were deployed into these areas aboard the ‘Trojan bus’ provided by First Bus.

“We will be taking appropriate action against those directly linked to incidents and working with youth services to divert others into positive activities away from the streets.

“We hope this latest operation will help to reassure residents that we are taking the issues seriously and also send a suitable deterrent message to those youths who involve themselves in anti-social behaviour in the area.”