An armed robber who held up stores in Wakefield at knifepoint has been jailed for more than seven years. 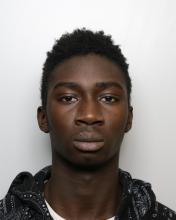 Musa Tangigora (18) of Trinity Street, Wakefield was sentenced to seven years, ten months in a young offenders institution at a hearing at  Leeds Crown Court on Wednesday March 6.

He pleaded guilty of two robbery offences and two of possession of a bladed weapon.

The 18-year-old was sentenced for a robbery offence at a store on Flanshaw, Wakefield on November 11 2018 in which he and two other suspects entered a property armed with a knife and a hammer.

Two members of staff in the store were injured in the incident.

He was also sentence for a robbery on Northgate, Wakefield on December 9 in which suspects stole cash after threatening staff with a knife.

“These were clearly both very frightening experiences for the victims and we hope they will take some comfort from seeing justice done with Tangiogra sentenced at court.”

Appeal: Robbery, Netherthong, Holmfirth
Images Appeal Over Leeds Street Robberies Series.
One Month On In The Search For Mateusz Lugowski
Six Men Jailed For More Than 55 Years For Sexually Abusing Girls In Huddersfield