More than 340 drivers were arrested for drink or drug driving during West Yorkshire Police’s festive crackdown.

In addition to increased enforcement action on the county’s roads, West Yorkshire Police ran an awareness campaign throughout the month highlighting the potential cost of getting behind the wheel after drinking or taking drugs. This included a video from showing the impact that drink and drug driving can have on your ability to drive.

​The driver was found guilty at court of driving whilst over the prescribed limit (Alcohol) he was sentenced to a 14 month driving ban, £120 fine, £85 costs and £32 victim surcharge.

Chief Inspector Katy Woodmason, Head of West Yorkshire Police’s Roads Policing Unit, said: “Despite the ongoing pandemic and pubs and restaurants being closed we have still seen a big number in people taking the risk and getting behind the wheel whist over the drink or drug drive limit.

“It’s disappointing that we have had to make 341 arrests over December, but that’s 341 drivers who are facing the new year with the prospect of losing their driving licence and potentially their freedom. This is nothing though compared to a family facing a lifetime full of milestones that a loved one won’t be at.

“Drink or drug driving can have fatal consequences for the person driving the car but also others on the roads.

“Drug driving is illegal and just as dangerous as drink driving. We will not tolerate people who think they are above the law. The drug wipe kit which has been around for a few years can detect almost immediately if someone has taken drugs and has just the same effect on your driving as drink.

“While we highlight the issue of drink and drug driving over the Christmas period, our officers work all year round to keep the roads of West Yorkshire safe and take those drivers who break the law off our roads for the safety of themselves and other road users.”

You can find out more about the campaign at: www.westyorkshire.police.uk/DrinkDrugDrive or by searching #WYPTheCost on Twitter. For regular updates on the work of the Roads Policing Unit, you can follow @WYP_RPU on Twitter.

West Yorkshire Police is supporting the annual Christmas Drink/Drug Drive campaign by the National Police Chief’s Council (NPCC) with the key message being that even though the pubs may be closed, drinking at home can still leave you over the limit.

The festive period can be a costly time for many with presents to buy, but West Yorkshire Police is urging people not to pay the ultimate cost this year by getting behind the wheel while under the influence of drink or drugs.

Throughout December, West Yorkshire Police will be carrying out increased enforcement activity on our roads including roadside patrols and taking every opportunity to remind people of the potentially fatal consequences for yourself and others of driving while under the influence of drink or drugs.

Last year we saw 469 arrests for drink and drug driving in December. That total is the highest month of the year.

We have seen an increase in people driving under the influence of drugs, with more people being arrested for drug driving than drink driving in the first six months of this year.

The Force will again be using the hashtag #WYPTheCost and highlighting the potential cost of being caught drink or drug driving. The consequences can include prison time, an unlimited fine and a driving ban, in addition to the devastating emotional impact on those involved and their families and loved ones if someone is injured as a result of a collision.

“Just because Christmas is a little different this year doesn’t mean that you can take the risk to drink or drug drive. We’re asking people to be mindful of drinking at home and being over the limit the morning after.

“Every year, we catch people driving under the influence of drink or drugs not just in the afternoon, evening but also the next day.

“Christmas can be costly enough but think about what it would mean for your new year to be facing losing your licence, an unlimited fine and potentially time in prison.

“That really is the best case scenario as well, drink or drug driving can have fatal consequences for the person driving the car, passengers and others on the road. Drink or drugs has been listed as a contributory factor is 10 fatal collision in West Yorkshire so far in 2020. Our NHS colleagues are already under extreme pressure – it is important, more than ever, that drivers do not add to this.

“This year, we have more dedicated roads policing officers working on the roads of West Yorkshire to prevent the devastation that drink or drug driving can cause. We will not tolerate people risking their own and others road users’ lives by driving under the influence of drink or drugs.

‘‘We all have a responsibility to play in keeping our roads safe, please don’t drive after having an alcoholic drink or taking drugs.’

“Driving whilst unfit through drink or drugs is a dangerous and unacceptable thing to do. As displayed in the local footage released by West Yorkshire Police, anyone in such an unfit state is a very real threat to other road users. It was only through the quick reaction of the other driver involved in this footage that we didn’t see what could have been a devastating collision.

“Whilst many of us have been driving less this year, road safety is rightly an ever present priority for our communities and that’s reflected in my Police and Crime Plan.

"West Yorkshire Police will be on our roads and streets looking out for drink/drugs drivers. I hope that this initiative will help to reduce numbers, keep our roads safer, and underline what is important at this time of year, and it certainly isn't putting other people's lives at risk to drive whilst under the influence of drink or substance misuse.”

The West Yorkshire Police Road Policing Unit will be proactively tweeting throughout the campaign follow @WYP_RPU for updates. Weekly stats will be released of arrest figures from Tuesday 8 December. 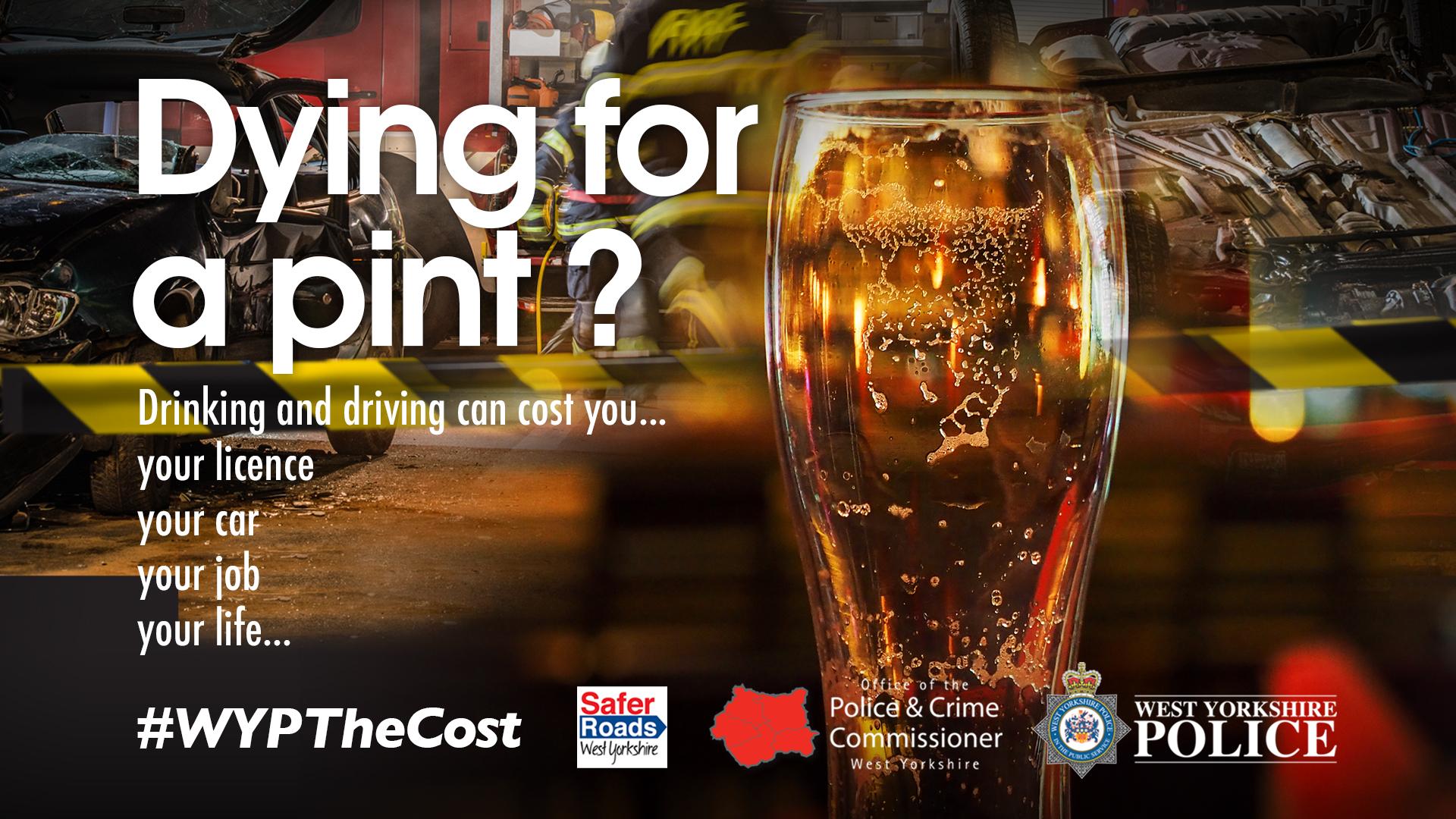